World Premiere of The Boroimhe Suite 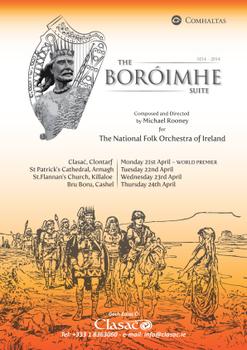 For the Millennium Celebration of Brian Ború in 2014 - Comhaltas Ceoltoiri Eireann has commissioned composer Michael Rooney to write a suite of music reflecting the life of Brian Ború. The Suite will be performed in four Irish venues by the National Folk Orchestra Ireland during Easter week 2014. The Orchestra, which will include both traditional and classical musicians, will be made up of the leading young musicians from around the country and will be augmented by dancers, singers and actors.

2014 marks the 1,000 anniversary of the Battle of Clontarf, where Brian Ború defeated the Vikings but was slain in battle. The Government and Local Authorities around the country will mark this momentous date with a variety of events and festivals throughout the year. As part of the celebrations, Comhaltas has commissioned composer Michael Rooney to write a suite of music, song and dance reflecting the life of Brian Ború. The reformed Comhaltas National Folk Orchestra of Ireland will perform the suite in Killaloe, Armagh, Cashel and Dublin over the Easter period in 2014 and at Fleadh Cheoil na hEireann in Sligo.

Michael Rooney is widely regarded as one of the finest exponents of the Irish harp in traditional Irish music. Originally from Scotstown, Co. Monaghan, Michael has composed seven major suites of music in the past fifteen years, including ‘The Battle of the Books Suite’, 'The Famine Suite' and 'The Millennium Suite'. His most recent suite 'The De Cuellar Suite' was premiered in Sligo 2011 and featured at the Temple Bar Trad Festival in 2013. Michael's music also featured on RTE's recent documentary of Queen Elizabeth's visit to Ireland “ The Queen's Speech'.He is much in demand as an arranger, musician and accompanist in traditional music circles.

Choreographers, Colette McAllister and Niall Holly have many years experience between them. Colette has choreographed many of the Comhaltas Tours over the years and was responsible for a Dance version of Shaun Davey’s “Brendan Voyage” that toured Brittany in the 1980’s –predating Riverdance by almost 15 years. Niall danced the lead in “Lord of the Dance” and has been both All Ireland and World Champion. He has also taught a number of current Champions. The Comhaltas National Folk Orchestra was originally formed in the 1980’s and is comprised of 50 of the leading young Traditional and Classical musicians, from all over Ireland.

The suite will be performed in Dublin by the National Folk Orchestra of Ireland. The orchestra, which will include both traditional and classical musicians, will be made up of the leading young musicians from around the country and will be augmented by dancers, singers, and actors.