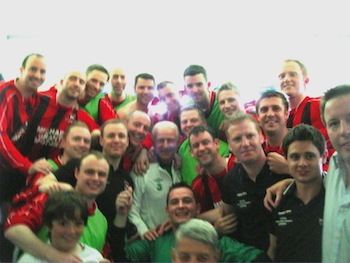 Giovanni Trapattoni took a break from his Euro 2012 preparations to wish Clontarf Athletic all the best in their final game of the season.

The Republic of Ireland manager popped into the dressing rooms at the AUL grounds in Clonshaugh on May 23 last before Clontarf Athletic met Harding FC in the final of the Richard Knight Trophy.

And after Clontarf won 2-1 with goals from Mark Duignan and Matt Conway, Trapattoni joked: ‘I always bring good luck.'

Victory for Clontarf capped a memorable season which saw the club recapture the UCL Premier Division title for the first time in 16 years – what a way to celebrate the club’s 50th year.

Under the astute management of Darragh Sheridan, the ‘rossoneri’ finished with 16 wins from 22 games to secure the club’s ninth league title.  A haul of 43 points from 48 enabled the ‘Tarf to pull clear of Trinity Corinthians and Terenure FC and clinch the title with two games to spare.

The success was an all-round effort as Sheridan utilised his squad of 18 players. Stephen Kearney, with 12 goals, finished as the club's top scorer, one ahead of Duignan and Adrian Eustace who had an outstanding first season with the club.  Conway’s goal in the final capped a run of eight in eight games in thepush for glory on two fronts.

Clontarf Athletic runs three teams in the Churches League on Saturday afternoons and new players, as well as former ones, are always welcome.  As part of the club’s 50th anniversary – the first game was played on September 5, 1962, - the club plans a one-off reunion in Green Lanes School, its home for 40 years, later this summer, for players, present, andespecially past. Details to be confirmed later.

For the latest news about your local club, log on to www.clontarfathletic.net.