The Gathering Of The Vikings - 2 days to go!

For the first year ever, the Clontarf Viking Festival will be taking place over two days, Friday 14th and Saturday 15th June.

On Friday there will be a multi-venue Comedy Night, being held in The Sheds, The Bram Stoker and Graingers/Pebble Beach Bar.

The Comedy Night will kick off from 8pm and will include performances from the brilliant Willie White, Eric Lalor and Chris Kent. Each comedian will play a set in each pub.

Willie White got into comedy in 2005, through the Irish TV programme Joy In The Hood, in which comedian Des Bishop ran stand-up workshops in impoverished areas of Ireland, including Ballymun, where White is from.

Eric Lalor, who was recently crowned Irish Stand-Up of the Year for the second year in a row by entertainment.ie, and who also hails from Ballymun, was also discovered through RTE Two’s Joy In The Hood in 2006.

Chris Kent, winner of the Comedy Smackdown at the Galway Comedy festival in 2010, is one of Ireland’s rapidly rising young comedians. His sharp style preys on his own everyday life and his ability to laugh at himself gives for some great viewing! Chris is one to watch!

Why not pop into one of the pubs mentioned on the night for some laughs and a drink to kick off what is sure to be a great weekend!

Be sure to ‘like’ the official ‘Visit Clontarf’ Facebook page here for further updates on the festival line up and for clips of the comedians in action.

We’re looking forward to seeing you all there! 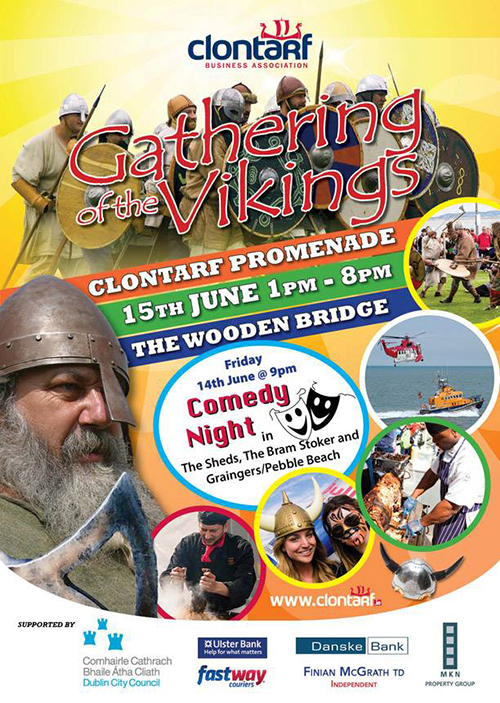