The Blue Nuns secure yet another impressive victory 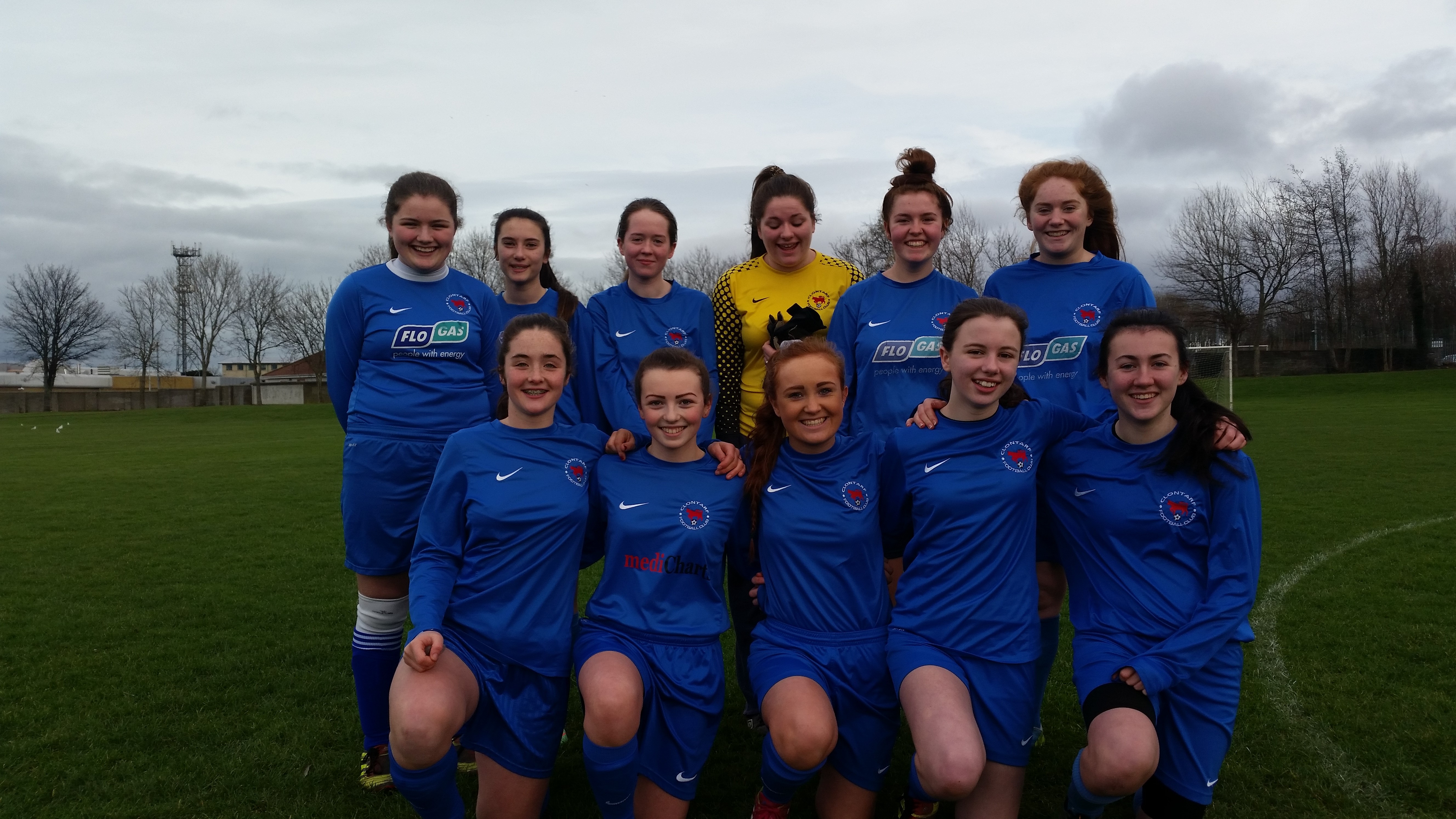 The Blue Nuns took to the road once again this weekend to the foothills of the Dublin mountains in Ballinteer for a top of the table clash against rivals Leicester Celtic. On a day where conditions were conducive to good open football the Nuns lined out with just 11 players at the start with some notable absentees for various reasons. The home fixture was a bruiser ending up in a draw with some of our Nuns looking like the bones of Our Lady of St Therese, so we knew this was going to be a tough game - never a problem though for this spirited bunch . A very keen lady referee was particularly thorough with ID cards and jewellery removal protocols. You would think that Nuns would be used to not being allowed to sport jewellery in public - but how times have changed in the 21st century. Captain Sarah Fagan elected to play against the strong wind in the first half and the game started at a high tempo as both sets of players leathered into the game and for the first 15 minutes it was an even contest with midfield like the Battle of the Somme. Both teams had good chances denied. For the Nuns the defence stood resolute with keeper Laura Brennan very much on her game and snuffing out a couple of Leicester moves by darting quickly off her line - fastest anyone has seen Laura run this season. The two full backs Aoife Toal and Sarah Farrelly were tackling like their lives depended on it as the Leicester wise players (No. 6 and No.9) impressed and always looked dangerous. Our charging bull Sarah Fagan, who was paired at centre half alongside The Mother Superior Hannah Lyons, made familiar rampaging runs upfield leaving casualties behind her like the streets of Pampalona - one of those ended up with a shot from the edge of the box which took the outer layer of paint off the crossbar .

After 20 minutes though we had one of those "Thiery Henry" moments when one of the Leicester players fooled the referee with a blatant handball and then with the Nuns expecting a whistle to blow, passed the ball to an unmarked striker who struck the ball into our net past Laura who had no chance - always play the whistle girls !!! After the initial bewilderment and shock the noisy travelling supporters raged injustice from the side lines, all of which fell on deaf ears with Our Lady in the middle who was unmoved. There's a well known pub up on Ballybough Road which could well have been named after her. You would always expect a strong response from our players and that's exactly what we got as the Nuns seemed to move into a different gear reacting to the gross miscarriage of justice. For the remainder of the half our midfield of Hannah Mc Williams, Tara Beary and Ailbhe Byrne tackled tigerishly and supplied slick passes into our 3 strikers Hannah Walshe, Khloe Bennett and Aisleen O Neill as we edged closer to a goal. Hannah W was using her speed to great effect which Khloe and Aisleen ran lines tirelessly closing the space in front of the Leicester defence. With 10 minutes to go to half time we received some divine inspiration as one of our key missing players Lucy Barrett appeared in the adjoining field like Our Lady in Ballinspittle, except as we all know Lucy is no statue. Now Leicester had another challenge as Lucy's arrival also allowed Sarah Fagan more freedom to go forward and after initiating the move and a series of passes involving Ailbhe, Hannah W and Hannah Mac, Sarah burst into the box and cooly equalised. For the remaining minutes of the first half the game was nip and tuck as Leicester fought very hard with half time coming at a good time for some tired legs .

In the second half Aoibhe Bell and Heather Bolger who had unselfishly made their way to Ballinteer straight from a GAA game, came on and the Nuns reverted to their customary 4 4 2 formation and looked menacing as Tara and Sarah Sagan swapped positions leaving Lucy, Sarah, Hannah Mac and Ailbhe now in a completely dominant midfield and Hannah W and Aoibhe upfront. The quality of play and the full blooded commitment from the Nuns in the second half was impressive as they produced undoubtedly their best 40 minutes of football, particularly given the calibre of our opposition who make the game very difficult and never gave up. The next goal was always going to be critical as the Nuns poured forward relentlessly with wave after wave of attack. Eventually the dam burst as Lucy and Ailbhe created another opening on the right for Hannah W who centred to Hannah Mac to score from close range, leaving the Leicester keeper to rant and rage at her defence pointlessly John Mc Enroe style. Further chances were missed by Hannah W and Aoibhe and Leicester almost equalised with a free kick which was brilliantly saved by Laura. Apart from that Hannah Lyons and Tara cleared their lines all afternoon and played as a tight back four with Aoife and Heather never missing a tackle. Then came the goal of the game as Ailbhe broke clear of 2 defenders and ran from midfield to strike a wonder goal from the edge of the box as good as anything you'll see in the Champions League. For the last 15 minutes the fitness of the Nuns was decisive as our midfielders broke the heart of the Leicester players with strong running and tackling and playing some very attractive football. Squad rotation is important and Sarah Farrelly, Khloe and Aisleen came back on to rest other tiring players. The Nuns closed out the game when Hannah W deservedly scored after some great running at their defence all day and like a cheeky monkey chipped the ball over the advancing keeper who in fairness had a great game herself.

At the end of the game as the Nuns baked in their glory and warmed down we realised that this crucial victory was indeed a 6 pointer and now leaves the girls clear by 3 points and a + 14 goal difference at top of the Under 16A league having conceded just 4 goals in 6 league games so far this season. Nun of the Match today once again was impossible to call with brilliant performances all round particularly from Laura, Aoife, Hannah Lyons, Lucy, Hannah Mac and Ailbhe. But for lifting the team off the ground like Roy Keane in Turin after the Hand of God threatened to ruin a good day out and inspiring the team with some brilliant all round play, todays NOTM goes to Captain Sarah Fagan. Next week after 2 tough away games the Blue Nuns return home to their Abbey at St Paul’s next Sunday at 10 am against Terenure for a dress rehearsal of the imminent Cup Semi Final and all supporters are most welcome.