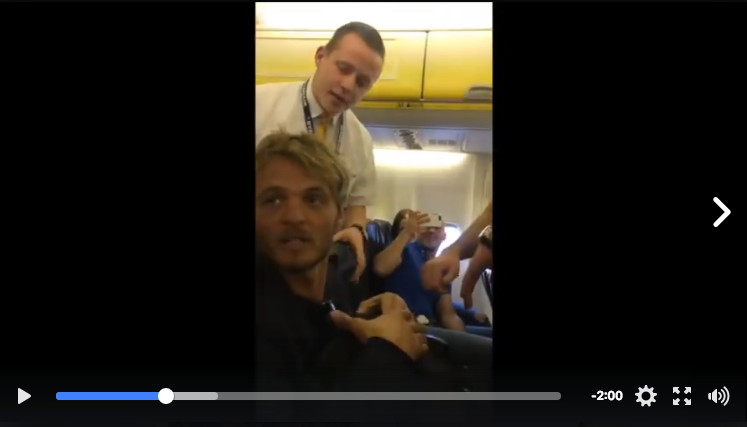 Two local Clontarf businessmen met up on a plane to Nice last Friday and a viral video was born.

The video shows a 'dispute' between ace-kitesurfer Francois Colussi from Pure Magic Watersports and two Ryanair stewards. You've probably already seen it. Many others have too as the video has now been viewed almost 20 MILLION times on Facebook having been posted by publications such as:

Unlike other recent airline cabin encounters, this one ends happily with some off-key singing from Ronan Morris a marketing strategist at Together Digital.

Watch the video below:

The big question emerging in the comments section of the above publications was asking whether it was a publicity stunt. Francois and Ronan have agreed to reveal today the TRUTH in a loveclontarf.ie.

Firstly, neither knew the other would be on the plane. A chance meeting but both have known each other for about 6 years as both are members of the Clontarf Business Association.

They managed to switch seats so they could chat.

Francois wanted to promote the Battle for the Bay event coming up next weekend.

Francois' idea this time was to try to get the stewards to make him play his accordion and to do so as a parody of recent negative passenger incidents. They worked out a few possibilities but they mostly wanted a very happy ending to make it a feelgood, positive piece.

Both of them were worried that the stewards would not allow it but in fact, they were very enthusiastic. Go Ryanair!

So, yes it was a setup but a pretty random one and it's given Pure Magic and the Battle for the Bay a welcome publicity boost.

SEE YOU ALL NEXT WEEKEND FOR THE BIGGEST, BEST BATTLE EVER!!!!

Yes, they did know that 'Dirty Old Town' is not actually an Irish song (written by Ewan McColl about the town of Salford) - but Francois doesn't know many Irish songs!! He is French after all.

This story was first covered by the Independent here