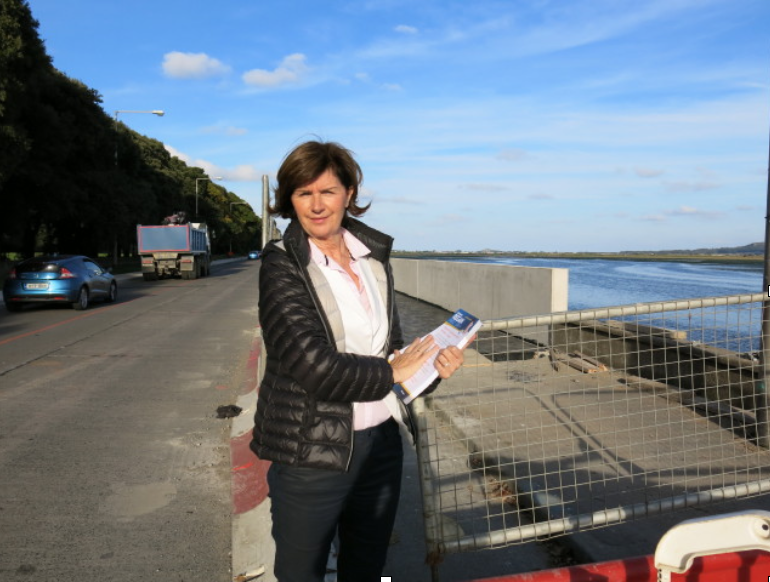 Earlier this week, we reached out to our public representatives asking whether they would like to contribute a public statement to loveclontarf.ie regarding the current issue of the Sea Wall. General Election Candidate Stephanie Regan responded with the following statement;

The issue of the Sea Wall commenced for me on 25th September, when I found myself trying to explain what was occurring on the coast to residents during my many canvasses.

From that point, I distributed details, supplied by Dublin City Council, of exactly what works were being undertaken. I posted this to my facebook and got 1959 views  immediately. This showed me the real interest and concern over this issue. Since then we have had the wonderful video from Raheny local Conor Morrissey, an online petition with 645 names to date and local signature objections of 460. Today I delivered these objections to Mr Owen Keegan , Chief Executive , Dublin City Council.

From my experience of the campaign, I believe that residents are unhappy with many aspects of what is occurring, not least the height and finish of the wall.

There is an unease that something is being constructed before their eyes and that residents are being left in the dark, however unintentionally.

I sincerely believe that both these aspects need attention, ie the Seawall height and finish and the sense of exclusion and wariness about our planning systems, which I believe are failing the residents here in Dublin Bay for the second time this summer. ref( Dumping 10 million tonnes of silt).

I do not think that we have an effective system of planning when residents are signing petitions to be heard. I have spoken with the Dept. of Environment and am making a specific submission on the changes that I believe are necessary to our planning systems going forward, this will be on my website stephanieregan.ie.

I have noted that the Dumping application was placed in the newspaper on the Friday of the August Bank Holiday and that the Part 8 Planning for the present works was placed in the newspaper on December 14th, again in my view a time of year when all our attention is focused on shopping, family and enjoyment. Since we normally only have 5 weeks to object or make submissions, it seems to me that this level of notice is wholly inadequate, for applications that run the length of our coast.

I hope that the display of discontent by residents focuses our Councillors, and Dublin City Council to find a resolution that is acceptable, safe and in line with best practice. I, personally find it very difficult to accept that the sea wall is to be raised to it’s highest point exactly where flooding occurs the least at St Anne’s and believe that for most residents this is core to the issue.