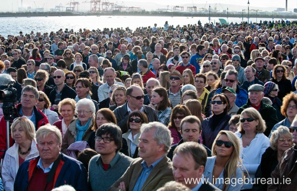 On Monday night we got the result that we had all been hoping for. The current Flood Defence plan will not go ahead and Dublin City Council must now go back to the drawing board.

Given that just two months ago, we were a stroke of a pen away from this plan being given the go ahead, this is a turnaround of huge proportions and it is a massive victory for people power.

The people of Clontarf stood resolutely together against this plan and were backed by many other residents from all over Dublin. Our reward today is that we have a real opportunity to shape a new flood defence plan. Our long term reward, we hope, will be the preservation, in so far as possible, of the beautiful amenity on our doorsteps.

With such a community-wide effort, there are so many people we would like to thank.

The various committees and specialist groups that put in long hours on the campaign. This included:

All of the above gave of their time for no financial reward. The hours put in by many individuals were at the expense of their own businesses and family time. We were blessed to have so many committed volunteers.

The celebrities that helped us raise awareness of this campaign. In particular, Roddy Doyle, whose tour-de-force speech at the first protest will long be remembered.

We would also like to thank all of the local clubs and societies that rowed in behind us. In particular, the Rugby and GAA clubs who spread the word across their membership base, and there were other such examples too.

We are very grateful for the support we received from beyond Clontarf. There are too many to mention here but we would like to mention the Yachting Clubs and Associations from around the Bay that came to our presentations and who also wrote letters of support. We would also like to mention the East Wall Residents' Association (Angie Broderick and others) who we believe simply could not have done more to help us. Their own Councillor Niall Ring was also a huge support to us. Other residents from all over Dublin also contributed greatly to the campaign.

Each of our five local councillors voted against the plan and lobbied their party colleagues to do likewise thus leading to a 52-0 vote against the plan. We appreciate their support in this important matter. We would like to especially acknowledge the front-running role played by Councillor Jane Horgan-Jones (Lab) and Councillor Damian O'Farrell (Ind) who, at the November DCC meeting, were instrumental in setting up the crucial vote this week.

Most importantly, we would like to thank all of you who supported the campaign. At the outset, we did not know if the people of Clontarf would feel as strongly as we did when we had heard about the Flood plan. We were heartened by the almost immediate reaction that we received through our website.

Thank you to everyone that contributed funds to the campaign. This includes residents and local businesses. These funds helped us get the high quality mock ups for our presentations and covered our significant printing costs. There is likely to be a surplus of funds. This will be held so that we can pay for further expert advice at the next stage of this process.

Thank you to all of who made a submission. Each and everyone of these submissions made a difference. Also, thanks to the people that wrote directly to public representatives and to the newspapers to express their views. Further thanks to those of you who were very active on social media networks helping to spread the word.

Thank you to everyone that turned up at the two events to show your support and to give us a clear and credible mandate to work on your behalf.

We would also like to acknowledge the people who supported the flood plan. While we did not agree with their viewpoint, we sought at all times to respect their concerns. Their views have also heavily influenced our view of our continued responsibility to ensure that the pressure is kept on DCC to revisit the flood defence issue as soon as is practical. We all see the need for flood defences - now we must find the most appropriate solution.

We now look forward to re-engaging with Dublin City Council to get this planning process back under way. We are confident that the next public consultation will not only be effective, it may set a standard for a consultation of this kind. We are ready, willing and able to make the necessary contribution to deliver a solution that protects the amenity and one which we can all be proud of.

We have received hundreds of emails over the last few weeks and also since the result on Monday. We have not had time to reply to each of them individually so please excuse us on this.

Finally, we would like to say that our faith in democracy has been restored by this endeavour. Lone voices may be hard to hear but when many join together the message can resonate and become truly compelling. This plan was wrong for Clontarf and almost all of us knew that. We all played our part in defeating it and we believe that our reward will be the continued enjoyment of our prized amenity by many generations to come.

Thank you all again.