The following is a statement from Cllr Naoise O’Muiri in relation to the Clontarf to City Centre Cycle Route. To respond to Cllr. O’Muiri's statement please email him at campaign@naoise.ie.

The Clontarf to Amiens St cycle route has become one of the busiest in Dublin city with the top 3 morning peak locations as indicated by cycle counts for 2016 (total number of cyclists passing between 7 am and 10m) being as follows:

There was a total of 4,587 vehicles (including cars, buses and lorries) passing Newcomen Bridge during that 2016 7am-10am cycle count.

Looking to the future the National Transport Authority ran a 2021 Cycle demand model taking census data and count data as inputs to predict future inbound cycle volumes from 7 am to 10 am.

The results for the routes feeding into Fairview are very interesting and set out in the graphic below. 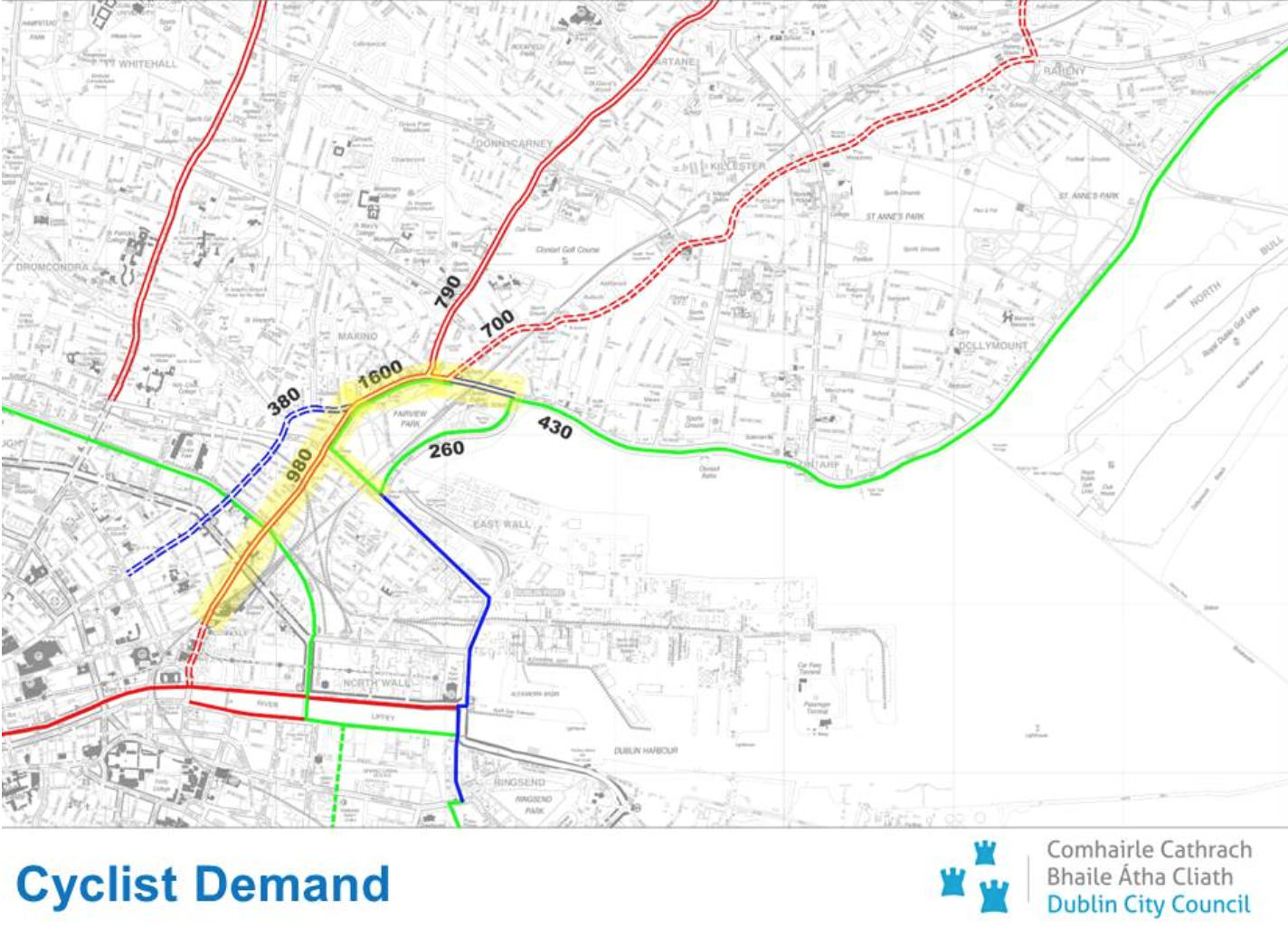 You can see that more than 80% of in-bound cyclists are coming down either the Malahide Road or the Howth Road; less than 20% are actually coming in from the Clontarf Road.

Assuming that cyclists wish to go back to where they came from (a reasonable assumption!) then this represents the nub of the issue – how do we provide the safest and most usable outbound route for those 80% of cyclists that want to go up either Malahide Road or Howth Road?

If you route them through Fairview Park they will have to:

(1) Cross 3 lanes of traffic and 2 bus lanes at Annesley Bridge, most likely through a new signalling system which will delay other traffic at this location

(3) Cross up to 4 lanes of traffic and 2 bus lanes when coming back out from Fairview Park across to Malahide Rd or Howth Rd; again most likely through a new signalling system which will also introduce general delays.

It is simply not realistic – most commuter cyclists won’t take the route, choosing instead to go down the main road towards Fairview in direct competition with cars, buses and all other traffic with all the associated safety issues that currently exist.

So a fundamental principle of the Scheme is that outbound cyclists go on the Fairview village side of the road on a new dedicated cycle lane that is wider, raised from the road level where possible and with sufficient clearance space to avoid parked cars and other dangers.

It is this new outbound lane that has brought about the road realignment at Fairview Park as effectively the entire carriageway is being shifted towards the park to make room for this new lane.

The original proposal from Dublin City Council was to remove the trees on the edge of the park to make space for this realignment. However, there was an extensive campaign mounted to save those trees.

Dublin City Council assessed the feedback and design and recommended a change to the design to keep the trees and instead remove part of an inbound general traffic lane; this was finalised as the removal of 298m of inbound laneway at the October 2017 Council meeting.

This is a compromise solution and as a car driver I can understand why motorists are unhappy at the loss of roadway and likely extra queuing time at certain times of the day; however cyclist safety is of equal paramount important and we have to provide a safe environment for cyclists as the most vulnerable road users after pedestrians.

I acknowledge that there are interest groups and public representatives that are opposed to this scheme – however, the onus is then on them to outline their alternative solution for a usable and safe outbound route for cyclists; running with the status quo in Fairview is just not good enough.

This project once complete opens up the potential for usable and safe cycle routes going up the Malahide Road and the Howth Road to serve Kilbarrack, Raheny, Clontarf, Killester, Artane, Coolock, Clarehall, Beaumont and a whole range of additional Northside locations.