Earlier this week, we reached out to our public representatives asking whether they would like to contribute a public statement to loveclontarf.ie regarding the current issue of the Sea Wall. The following is a statement from Cllr. Damian O' Farrell;

We want to thank everyone who attended the Public Meeting on Tuesday night organised by Finian.

If you remember we were looking for a strong public mandate to go ahead with a Special Meeting of Dublin City Council that we had set in motion with the Wall / Biosphere etc being the only item on the agenda. We received an overwhelming mandate and DCC have announced today that a Special City Council meeting will be held on this matter next Wednesday 11th November [see letter below]. Despite various attempts this is the first time this matter will be aired in public with Senior DCC Mgmt.  We want to thank the four councillors who had the foresight and courage to co-sign this formal request with Damian, Cllr Nial Ring (Ind), Cllr Cieran Perry,  Cllr Paul Hand (Ind), Cllr Tom Brabazon (FF).

Again, as mentioned at the meeting City Hall is a political forum and it is our intention to draft a motion that will reflect the community’s aims and bring all the local councillors together as this will give us a greater chance of success.  However as you can imagine and from looking at the various public rep statements on Clontart.ie this will be no easy task. The Cycleway is a much welcomed element of the project and there is a wide acknowledgement in the community that we need flood defences in our area, homes and businesses must be protected there is no argument with that. However the size, scale and downright ugliness of what is being thrown at us in the St Anne’s vicinity is not acceptable and all public reps need to be at one on this.

The final decision remains however with CEO Dublin City Council Owen Keegan who has the power to initiate a variation on the present Flood Defence Wall contract. The last City Manager took the decision to stop the 2011 Promenade Proposal under public and political pressure as he didn’t want to continue with a project the community didn’t want.  At Wednesday’s meeting Damian will be detailing the commitments to this community that have been broken, suggesting solutions as well as looking for a commitment from the CEO to resolve this matter. The more support we receive in City Hall the better and in fact local political opposition may put the final nail in the coffin of this campaign. We are one northside community, we stuck together as regards the promenade debacle in 2011 and we’ll stick together again now. We will keep you updated. 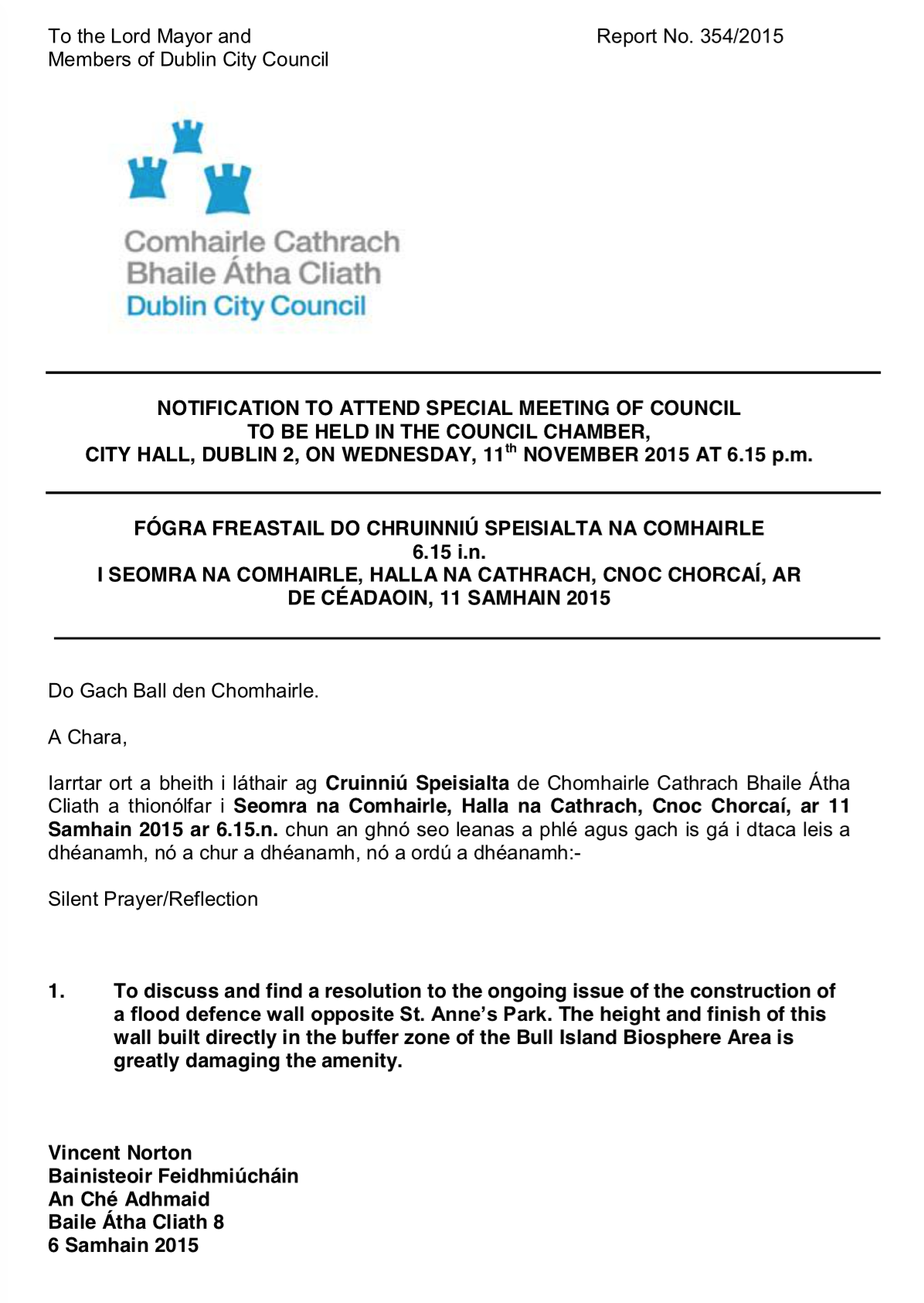