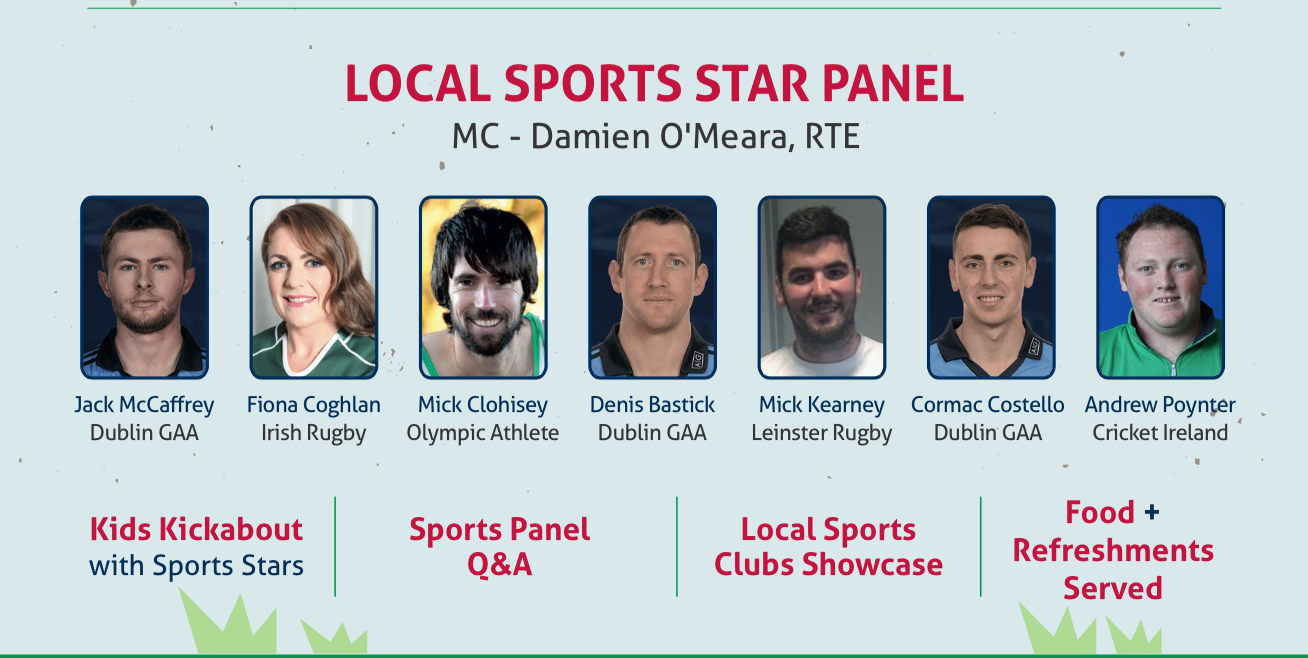 This Thursday 7th April, a selection of Clontarf’s finest sports stars will visit Clontarf Rugby & Cricket Club to have a kick-about with the kids and take part in a special sports Q&A!

So who’s going to be there? We’ve got a number of stats on each of the sporting legends who will take part in the event!

It is probably safe to say that every kid in Clontarf with even a slight interest in GAA knows Jack McCaffrey. Jack got his start in the ever popular Naíonra in Clontarf GAA and came up through the ranks with the club, which he still plays for, and in 2015 was named both the Sunday Game Platter of the year and the All Stars Footballer of the Year in 2015. Watch our video interview with him here. Veteran mid-fielder,  Denis Bastick and forward Cormac Costello who both have All-Ireland and Leinster Victories under their belts will also be there to talk all things GAA!

Fiona Coghlan is one of the most well-known female Rugby players Ireland has ever had, not to mention being probably the country’s most successful Rugby captain ever. Born in Clontarf and a past pupil of Holy Faith, Fiona took over the Irish captaincy in 2008, and by her retirement in 2014 she had accumulated 85 international caps, as well as bringing Ireland to its first ever Six Nations Grand Slam!

If you take the occasional walk along the Prom, there’s a strong chance you’ll have spotted Mick in training mode, hail, rain or shine! An avid marathon runner, Mick has his sights set on this year’s Olympics in Rio and after running 2:17:00 in Berlin in September and 2:15:10 in Seville in February, he is ranked second fastest among the top three Irish hopefuls!

Having attended Mount Temple Comprehensive School and played with Clontarf Rugby as well as playing internationally at an underage level. Kearney has been a prominent player for the Leinster squad since moving from Connaught in 2015.

English-born Poynter is a veteran of Clontarf cricket and recently represented Ireland in their big at the world Twenty20 in India. He is a right-handed batsman and off-spin bowler

So you have a little one who’d like to give Dublin GAA’s Jack McCaffrey a run for his money in a sprint? Or maybe a youngster who’d like to see Irish Rugby’s Fiona Coughlan run through a play with Leinster’s Mick Kearney?

Pop down to the Rugby Club on Thursday 7th April between 4 pm & 8 pm to the Clontarf Business Association’s Business & Sports Expo for a fun FREE event for the whole family!