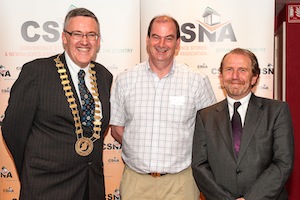 Mr. O’Hara, owner of the Spar shops on Vernon Avenue and The Stiles Road said great value was on offer from businesses in Clontarf.

“We must all pull together during these tough times. There is great value for money out there in the local business community and I would strongly recommend that the consumer puts local business first on their shopping list.”

Vincent Jennings, CEO of the Association said the role of the local convenience store and newsagents could not be underestimated even in these difficult economic times. Customers valued the flexibility of shopping in well-appointed stores that opened at times and in locations that suited them.

Mr. Jennings said the actions of government, banks and wholesalers made it very hard for his members to survive without compromising on the value and service the shopper wants.

Addressing delegates Mr. Jennings said local authorities should not view convenience stores and newsagents as a ‘soft touch’ for easy revenue when deciding rates, and he urged them to set ‘realistic rates and fair charges’. He said two hundred shops nationwide had closed down last year.

Not only has the recession taken its toll but the government, banks and wholesalers are heaping more pressure on the local shop, he said.

Mr. Jennings has warned that there is little confidence in the sector with many of his members hit by tightening bank credit and rising costs.

'Banks are withdrawing overdraft and loan facilities leaving some shop owners unable to weather the economic storm. Suppliers are increasing their wholesale prices, which the retailers cannot pass on to the hard-pressed customers', he said.

'Our customers value the convenience of shopping in well appointed stores open at times and in locations that suit them but the actions of the government, banks and wholesalers make it very hard for our members to survive without compromising on the value and service the shopper wants', said Mr. Jennings.

He welcomed the announcement by Brendan Howlin TD, Minister for Public Expenditure and Reform in Seanad Eireann last week where he gave a clear commitment to safeguard retailers’ margins in the legislation being prepared for the new Lottery licence. The CSNA had engaged DCU Economist Anthony Foley to assist them in preparing a report for the Minster to make the business and economic case for retention of the existing 6% margin. “Retailers could not have afforded any reduction in margin, a point that the Association made very forcefully to Department Officials,” he said.