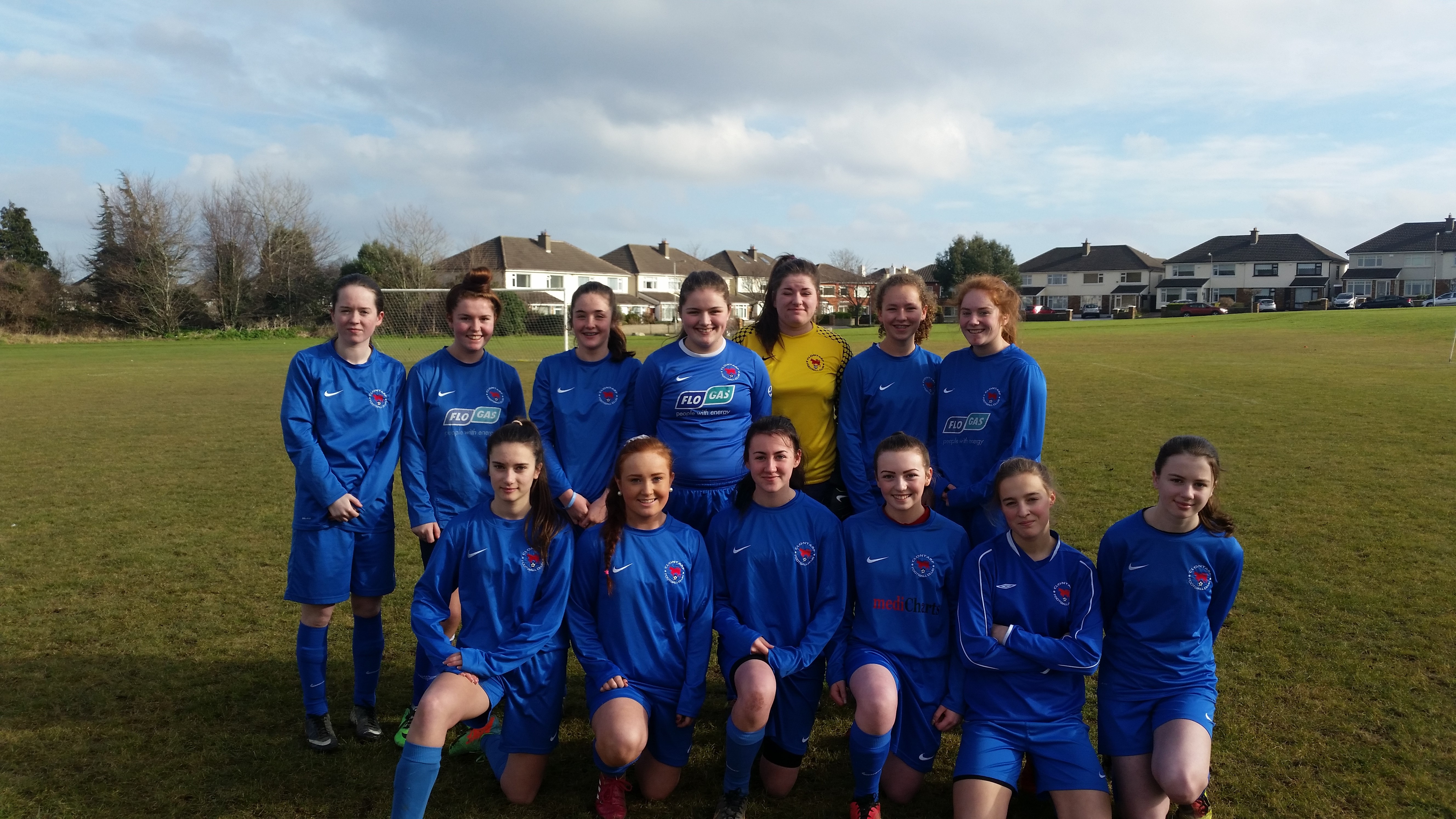 With a distinct whiff of spring in the air, the juggernaut that has now become the Blue Nuns legend steam rolled into Knocklyon this afternoon on an excellent pitch for the MGL Under 16 Cup semi final. These noon time kick offs seems to generate divine inspiration with the uplifting Angelus bells from Christchurch ringing loud in their ears. Losing home advantage proved to be no handicap for the Nuns who encountered stiff resistance from a well drilled and tough Terenure side who were certainly well up for this game. The early exchanges were tense as Terenure fought hard and put pressure on the Nuns midfield and defence. The Nuns central defenders Tara Beary and the Mother Superior, Hannah Lyons (who could be heard barking out orders on the M50) were well up to the task today and were first to every ball taking no prisoners, clearing woman, ball and anything else that dared to get in the way. The two full backs Aoife Toal and Sarah Farrelly also saw a lot of the ball early doors as the Terenure numbers 9 & 10 attacked from the wings.

With the game being played at a hectic early pace it took a little while for the Nuns to take control of midfield and start playing with some fluency. After 15 minutes the flow of the game changed as the midfield dynamos Sarah Fagan and Ailbhe Byrne started to win the 50/50 challenges and spraying the ball around to the wider players Heather Bolger and Hannah Mc Williams asking harder questions. Terenure were hanging on for the next 10 minutes. The deadlock was broken when El Matador (Sarah Fagan) carved an opening on the right side of the attack, slipped the ball into Aoibhe Bell who had stayed onside. Aoibhe then drove the ball across the goal line to gift Hannah Walsh a close range shot and Hannah made no mistake. At this point the Nuns moved up a gear, dominated possession and had a few narrow misses as the Terenure keeper made a couple of great saves from Aoibhe and Hannah Walsh.

Unfortunately for Aoife her ankle gave way after 20 minutes and the Nuns were forced to reshuffle the rosary beads with Heather dropping back to right back (under protest) and Aisleen O Neill coming on at outside right to play a stormer. Persistence paid off as the Nuns increased their lead just before half time when Sarah Fagan and Hannah Walshe outfoxed the defenders to release Aoibhe who darted into the penalty box at speed, rounded the keeper nicely and calmly tucked the ball away like The American Sniper . At half time the Nuns led 2 nil and after some rehydration and a fine blast of the Ave Maria, they revved up another gear. Khloe Bennett came on upfront and made an immediate impact with her all action style creating plenty of discomfort for the Terenure defenders.

With the scent of the cup final now in their nostrils, the clinical Nuns pushed on again in the second half with Ailbhe, Heather and Sarah Fagan in far more advanced roles now and playing like the Holy Trinity. Sarah Fagan (who was everywhere and wearing No.4) caused the Terenure manager to have triple vision when he complained that Clontarf had three players wearing No.4 . In fact he was right, but must have been spooked as Terenure played two man markers on Sister Fagan in the second half to no avail. The jersey mix up was sorted out however after a good laugh.

Terenure were resolute in defence but rarely threatened our defence as the Nuns poured forward like wave after wave of attack like the Normandy landing. Hannah Mac was now starting to cause serious problems out on the left wing with her majestic ball skills and Hannah Walsh’s speed had the Terenure defenders running backwards like new born giraffes after a few glasses of sherry. A nasty tooth injury forced Aoibhe to take a rest and once again the Nuns had to reshuffle the beads. For a 10 minute spell Terenure started to get forward on a few occasions but the speed and sheer will of the full backs Sarah Farrelly and Heather snuffed out any real danger. Behind them Sister Laura Brennan was rarely troubled in goal but impressively dealt with any threat by racing off her line like a Leopard minding its cubs and launching her kick outs into the sky like scud missiles.

After 15 minutes the gap increased when Hannah Lyons hit a 30 yard cross-field pass to the quick-fire Hannah Walsh on the left who cut inside her marker and stuck an unstoppable shot into the roof of the net - game over…. This was a killer blow for Terenure who seemed to wilt at this point. Ailbhe, Hannah Mac and Sarah Fagan were by now unstoppable in midfield and Aisleen and Khloe created several good chances before eventually Khloe scored a fantastic 4th goal after being put in the clear by Ailbhe. This was Khloe’s first ever goal for Clontarf and she was clearly delighted with herself and deservedly so. In the last 10 minutes Hannah Lyons who had to retire with a knee injury with Aoibhe coming back into midfield and Sarah Fagan slotting seamlessly into centre half. Ailbhe was very unlucky after making a great run and hitting a Peter Lorimer speed shot that whistled just over the bar.

At the finish the Nuns were elated and celebrated the win in style.This may be the golden generation for Clontarf girls who have reached their first ever soccer cup final at any level and remain unbeaten in all competitions this year and top of the U16A league. For a few of the girls (Sarah Fagan, Heather & Aoibhe) it is also worth mentioning their other fantastic achievement this week in being selected for the final Dublin Under 16 GAA squad. Clontarf GAA Club has 5 girls in all selected, the largest representation for any Dublin club. The future for girls sport in our area is very bright indeed.

This was truly a great overall team performance today and for the first time this season it was impossible to select a Nun of the Match as every girl played their heart out and fought hard for each other and for their club, so well done to all of the Nuns as we all look forward to the Cup final on Sunday 26th April at the NDSL Head Quarters, Oscar Traynor Road, all supporters welcome.