Appeal For Help After Racing Pigeons Are Killed In Clontarf

We regret to inform our readers of a terrible incident which occurred in Clontarf last weekend, sometime between Friday 27th and Saturday 28th of June. A local Clontarf pigeon fancier found that their 23 racing pigeons were murdered on their private property. The incident took place during the night, sometime between 10:30pm Friday and 4am Saturday morning. The individual in question is a Clontarf native who has lived in the area all their life. Understandably, they are desperate to understand why this has happened and want to appeal for help to find the perpetrator

The only way the perpetrator could have entered the property is by walking down a lane way near the house in question and hopping over an 8ft wall into the individual's back garden. The pigeons themselves were kept in a specialised pigeon loft in the garden. The pigeons were loose in the loft. The loft has one door which was secured with a padlock. However, the intruder did not enter through the door. They entered by pulling back a sheet of wire at the front (wire designed to keep out animals such as cats and foxes) and entered from there. To have fit into the loft by pulling back the wire, the perpetrator would have to be of a small, thin build and be very agile. The wire was crudely put back in place when the suspect left, but it was immediately apparent that the wire had been pulled back, along with the fact that the padlock on the door was still intact. The loft also has an internal sliding door which had been slid back, thereby proving that a human is responsible.

The Clontarf local who owned the birds noticed that something was askew when they noticed a lack of activity in the loft on Saturday morning. When they entered the loft at approximately 7:15am to investigate, they were horrified to find their 23 prized racing pigeons dead on the floor of the loft. The pigeons had had their necks wrung, and some appeared to have been thrown on the ground and stomped on. Amongst the 23 were some 15-day-old pigeon chicks, who had been jumped on and crushed by the intruder. The age of the chicks is about the equivalent of a 6-month old child.

Understandably, the individual in question is in shock that someone would do this to innocent creatures. Aside from the emotional attachment they had to their pigeons, this incident has also set them back about four years in breeding terms. The oldest pigeon that was killed was 15 years old. However, racing pigeons can live for almost 25 years if cared for properly, meaning that these birds were killed in the prime of their lives.

The individual spoke with us and wishes to warn other pigeon fanciers in Clontarf and the surrounding areas to be watchful. They also wish to extend the warning to anyone who keeps tropical birds in outdoor aviaries, etc.

The individual rang the gardaí immediately and reported the crime. The gardaí who investigated the scene were particularly disturbed by the case. The gardaí are currently doing everything they can to find the culprit.

Please share this story to raise awareness so that the perpetrator can be brought to justice. Someone out there knows something. If you have any information or suspicions, please contact Clontarf Garda Station. Clontarf is a lovely area, but acts such as this have no place in such a wonderful community. It is truly horrible that someone out there is committing acts of mindless violence for seemingly no motive.

The following images are of a sensitive nature. 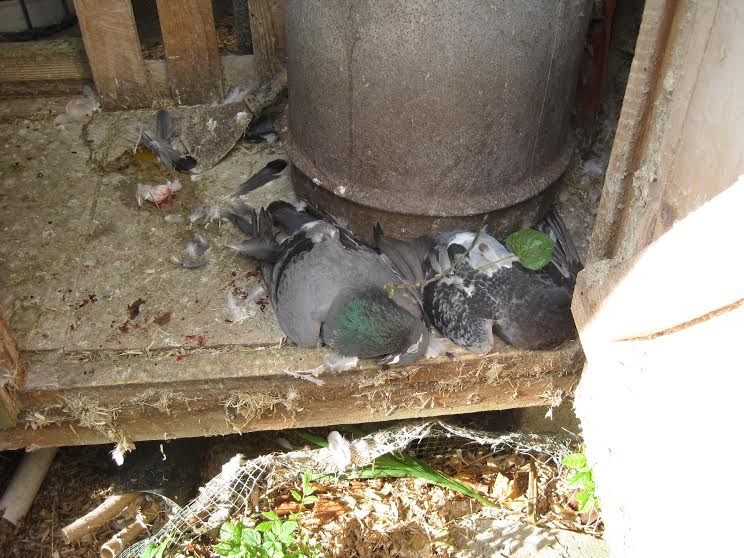