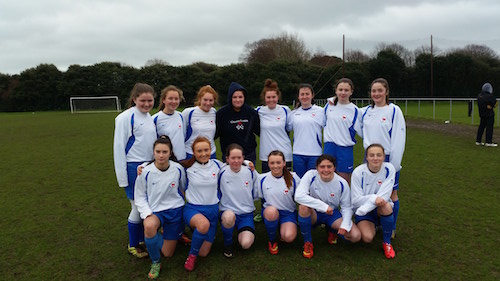 On a morning of torrential early rain where you wouldn't send a starving duck out to survive and with the Duvet covers odds on to prevail at breakfast time , the Blue Nuns returned to their Convent at St Pauls for a table topper against the hardy West Finglas Tenants Association (WFTA) . With a Royal Blue clash of colours the Nuns were sporting their Daz ready white habits in a mud bath the Nuns showed their steel to prove that they can wallow in adverse conditions, mix it up and win ugly to secure three vital points. The jovial referee Christy Lawrence who was always encouraging both teams, wasted no time in ensuring that the game started on time again around the perfect noon time kick off. We all know at this stage that the Nuns are at their most vigilant at this time, having been to mass, said their rosary and done their meditation against the backdrop of the Angelus bells from St Brigids. A full squad of 14 players were available today for the first time all season. However, one or two of the Nuns (who shall remain anonymous) could be seen wincing with the sight of the mud and rain before the start of the game, muttering something like they're off getting dirty for lent. As the game kicked off we realised that anything was likely to happen today.

The early stages of the game were not pretty as the White Nuns crossed swords with their WFTA counterparts. No real pattern emerged for around 10 minutes and the Nuns seemed a little out of sorts as our midfield were struggling to take control of the game in the manner we are accustomed to seeing with the ball getting stuck in the mud around the pitch and the WFTA players giving as good as they got. The Nuns had a formidable midfield quartet today with Captain Sarah Fagan and Lucy Barrett in central roles and Ailbhe Byrne and Hannah Mc Williams the two wide players. Upfront the Nuns strike force was equally strong with the crafty Aoibhe Bell playing alongside the quick-fire Hannah Walshe. After a quarter of an hour the Nuns took the lead, slightly against the run of play with a neat passing interchange between Lucy, Sarah and Hannah Mac sent Aoibhe racing clear one on one against the excellent WFTA keeper and Aoibhe made no mistake clinically striking the ball low into the right corner of the net. Back came WFTA though with a deserved equaliser and after sustained pressure on the left side of the pitch, their strong No.7 beat a couple of the Nuns and took her chance brilliantly with a great strike that Sister Laura Brennan had no chance with. Game back on now.

The equaliser seemed to have a serious wake up effect on the Blue Nuns who realising they were in a game now, started to win the marginal tackles in midfield and moving the ball swiftly along the ground building play patiently from the back. Lucy and Sarah Fagan were now beginning to impose themselves on the game and all four defenders - Hannah Lyons, Tara Beary, Sarah Farrelly and Aoife Toal were now tackling with a lot more purpose. The WFTA keeper was forced to make a string of good saves from Sarah Fagan, Aoibhe, Ailbhe and Hannah Walshe for the next 10 minutes. Aoibhe has developed great skill in whipping in corners with our menacing midfielders and strikers lurking dangerously like Tigers stalking their prey. One of those corners from Aoibhe caused mayhem in the WFTA defence resulting in an OG to see the Nuns regain the lead. Sarah Fagan was now powering around the pitch and playing intelligent return passes off the two strikers and Ailbhe and Hannah Mac. One of those runs created the third goal when Sarah and Aoibhe combined nicely and Sarah kept her composure to slam the ball into the back of the net from the edge of the box with the keeper off her line.

WFTA were tenacious though and proving to be hard to shake off. They had improved immeasurably since the early season win for the Nuns in Finglas. With great courage their Numbers 7, 9 and 10 ran aggressive lines at our defence on the left for the next 10 minutes and deservedly got a second goal after a Hail Mary of a mix up in the Nuns defence. Changes were made with the speedy Heather Bolger coming on and playing very well to steady the ship on the left side. Khloe Bennett and Aisleen O Neill came on as we rested Hannah Walshe and Hannah Mac for battle in the second half. Both Khloe and Aisleen delivered fresh energy upfront and created a few chances of their own which were smothered well by the WFTA keeper. Halftime approached and the Nuns nervously replenished their reserves. The wind had picked up and was now dead against the Nuns in the second half. A sharp crack of the whip was required by the two Archbishops to remind the Nuns they were now in a serious battle and needed to up their game to secure the points.

The wind was now playing havoc with the game for the first 15 minutes of the second half but our defenders coped very well with a sustained WFTA pressure and The Mother Superior Hannah Lyons and Tara The Enforcer, Aoife The Impaler and Heather The Merciless were taking no chances and winning ball after ball. Heather was really getting the measure of her marker the dangerous No.7 (Chelsea) with her speed and sharp tackling. A goal for WFTA now would have been fatal but the Nuns were still really struggling to get out of their own half as WFTA used the wind to their full advantage. Lucy also came back brilliantly on a few occasions to help out the defence with some brave clearances and Laura Brennan made two great saves, the second where she dived bravely onto the ball ahead of two incoming players and managed to cover herself in mud. Laura was unimpressed though as one of her false nails came off, a a hangover from the Nuns mid-term night out at The Wright Venue.

We all thought the Nuns had increased their lead against the run of play when Sarah and Lucy combined to free Khloe and Ailbhe. However, Ailbhe was fairly judged offside after putting the ball in the back of the net. For the last 25 minutes back on came the two Hannahs and within a few minutes both of them combined with Ailbhe, Aoibhe and Lucy for the goal of the game as the Nuns ripped open the WFTA defence with slick passing leaving Sarah Fagan calmly placing a great finish into the back of the net from the edge of the box, a Brazillian cameo from the Nuns. This was the critical goal as WFTA seemed to lose their shape and threw caution to the wind after that which played into the hands of the Nuns who were not going to let slip now. Further chances for Clontarf were either missed or saved by the WFTA keeper from Aoibhe, Ailbhe and Hannah Walshe. The Nuns fifth goal came 5 minutes before the end when Aoibhe was put through by Lucy with only the keeper to beat and she slipped the ball expertly past the inside post of the brave WFTA keeper.

The game finished 5 2 in the end but the scoreline was a little flattering as WFTA had pushed the Nuns very hard in adverse conditions and played the game in the right spirit all day. This was a vital win for the Blue Nuns who are now 9 points clear of their nearest rivals WFTA, but who still have 2 games in hand. The White Nuns jerseys had lost their Daz sheen from all the Mud at the end of the game but on days like these the important thing is to keep going to the end and these Nuns seem to do that every week always battling back when adversity or challenges beset them. There are now 7 league games remaining and every one of these will be hard fought as other teams improve and the Nuns resources will be severely tested when they are likely to be without some of their Dublin GAA players for some of these key games. Nun of the match today was a toss between the WFTA keeper who was excellent and our own Sarah Fagan. But the nod went to Sarah for showing great leadership by example and vocally around her, tireless running and two excellent goals. Well done Sarah and all of the Nuns today.