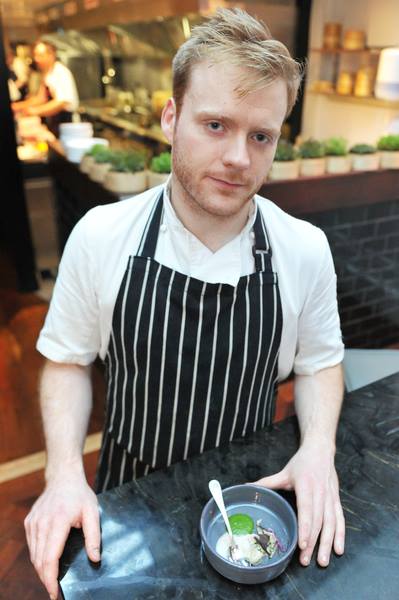 At just 26, Head Chef at Moloughney's John Fitzmaurice has reached the final of the Euro-toques Ireland Young Chef of the Year, 2015.

This year's theme is the 'Origins of Contemporary Irish Cooking' and John will prepare a Butter Poached Atlantic Monkfish with seaweed, fermented garlic, cod cheek, cabbage and Dingle Gin emulsion for the Euro-toques judges at Cooks Academy on Sunday 29th November.

The winner will be announced that evening at a gala banquet prepared by the five finalists and their mentors in the Shelbourne Hotel. For that event John has created a dessert which is also inspired by the origins of Irish cooking theme; Smoked Chocolate Mousse with Poitin poached pears, treacle crisp and Poitin cream.

Prior to joining Moloughney's John was sous chef at the Mustard Seed at Echo Lodge, Ballingarry, Co. Limerick. Originally from Cork, John had begun a degree in economics and maths at University of Limerick but, having taken a summer job in a kitchen, he loved working with food so much that he never went back, graduating instead with distinction from Culinary Arts at DIT.

Clare Smyth, an MBE and Northern Irish Chef is Chef Patron at Restaurant Gordon Ramsay and will be the special guest judge for the final. Clare is the first and only female three Michelin starred chef in the UK.

To keep up to date with the competition follow @EurotoquesIrl!