Local teachers to star in Michael Collins, A Musical Drama 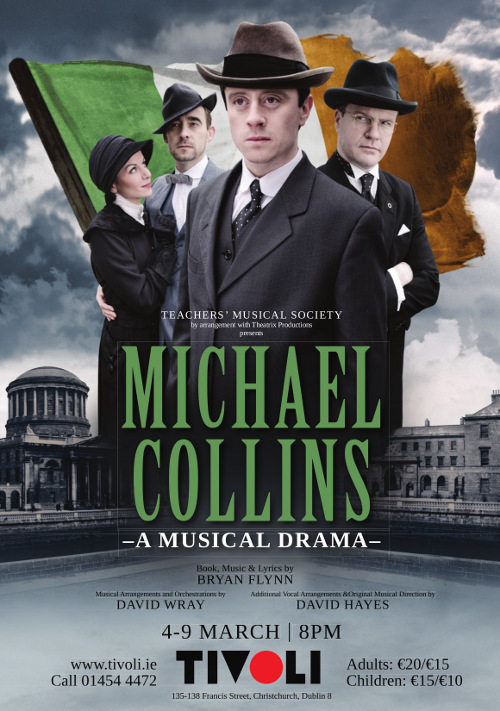 The extraordinary story of the real life patriot, statesman, soldier and lover, Michael Collins, will be showing in the Tivoli Theatre from March 4th - 9th, at 8pm nightly.

It will be performed by the Teachers' Musical Society, and will star two of Clontarfs very own teachers.

Both have appeared in a number of Teachers' MS shows, and are especially excited about this one! Check out the proptional video for the show here.

The star studded cast also includes Brian Gilligan as the 'Big Fella' himself, music teacher Fiona McManus who is no stranger to the musical world as the feisty Kitty Kiernan, Frank Beadle in his first Teachers' performace as Harry Boland and Séamus Sullivan who has appeared in all of the Teachers' 12 shows as the powerful Éamon de Valera.

This is a fresh new production with direction by Eoin Cannon, Musical Direction by Caitríona Ní Threasaigh and choreography by Orla Savage. The society is extremely excited about undertaking this vocally challenging and beautifully written show.

The Teachers' Musical Society is made up primarily of Primary and Secondary teachers and over time the group has grown into one of the leading musical societies in Ireland and has won numerous awards at the Waterford International Festival of Light Opera as well as from the Association of Irish Musical Societies (AIMS).