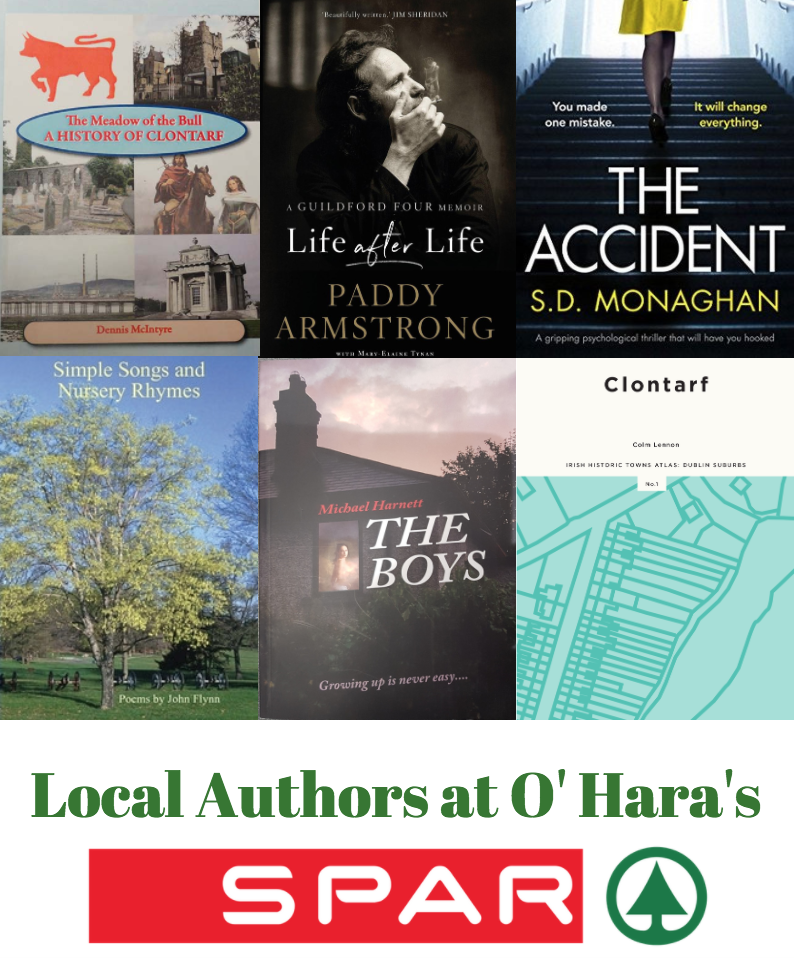 Despite it being the first day of Spring, it's still pretty cold out there. And with daylight savings not set to kick in until the end of March, the perfect way to while away these cold dark nights is a good book.

At loveclontarf.ie we strongly support our local community and would like to bring to the attention of our readers some fantastic local authors from Clontarf that have released books in the past number of months.

Below is a list of various books available from our local authors and some info each title.

These books are available locally at O'Hara's Spar on Vernon Avenue and Stiles Road. and at all good bookshops.

The story of Clontarf told through a beautiful collection of maps. A local bestseller which covers the topographical history of this beloved suburb.

'The Meadow of The Bull: A History of Clontarf', Dennis McIntyre:

An epic historical record of everything related to Clontarf. Chronicling the development of the suburb through the ages as well as fantastic accounts of contemporary events.

Following on from his 2000 book of poetry 'How're Ya Ray', John Flynn's latest offering has been highly praised by Leo Moran, Paul Kimmage as well as many others, a wonderful collection.

With its hugely successful run in the Viking Theatre, this book tells the coming of age tale familiar to us all set amongst the backdrop of Drumcondra in the late 60's.

With the lead up to St.Patricks Day, hard-nosed detective Dan Brick unravels an international plot to bring terror to the streets of Dublin.

Most of us are familiar with the story of the 'Guilford Four', 3 young Irish men and 1 British woman falsely accused of carrying out a bombing of a pub in London's Guildford district. This book is the harrowing account of one of those men, Paddy Armstrong. Now a beloved resident of Clontarf, Paddys telling of his mental and physical torture at the hands of cruel racist British police officers and subsequent 15 years imprisonment is a fascinating read.

"One mistake could change your life forever", this is an international bestseller which reached No.3 in the U.S. Amazon book charts. A truly heavyweight thriller.