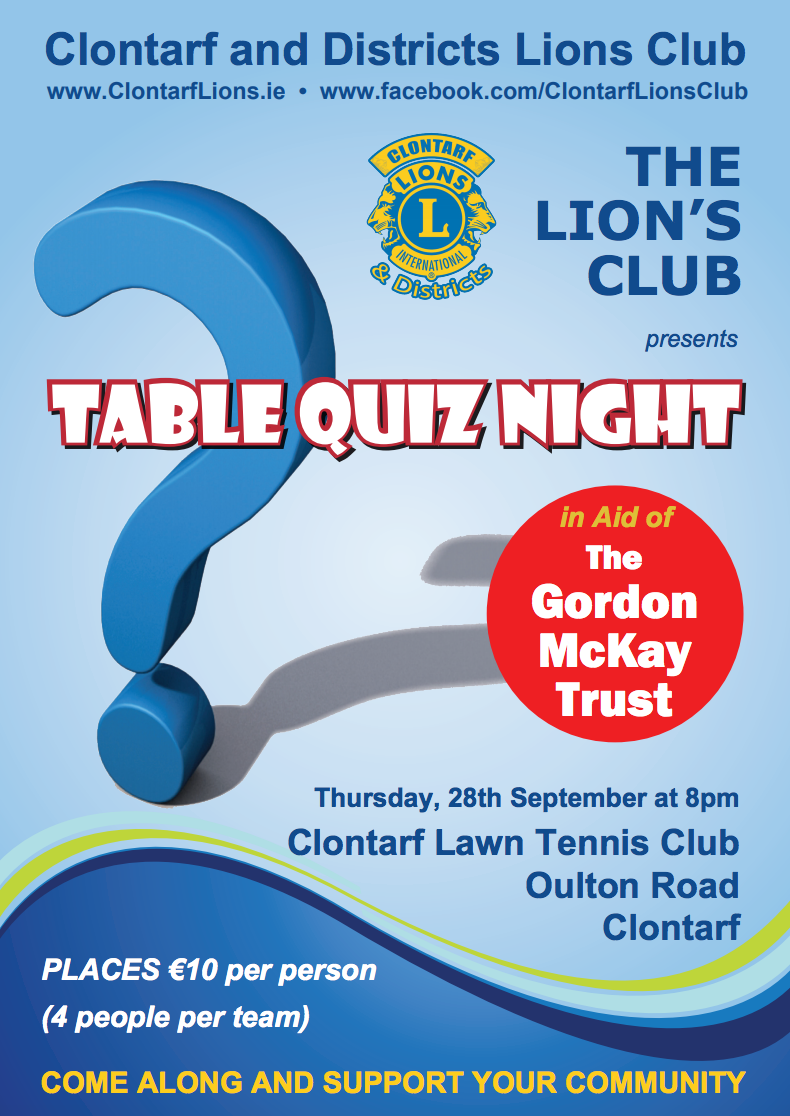 The Clontarf & District Lion's Club will host a fundraising Quiz Night in Aid of the Gordon McKay Trust.

Places are €10 per person and there are 4 people allowed on a team.

We've posted about local man Gordon before and an online fundraiser to help get him back on his feet. However, for anyone who isn't familiar with Gordon's story, we've added more information below.

Gordon is 41 and has an 11-year-old daughter Libby. In September of 2014,  Gordon suffered a perforated colon.  He was admitted to the ICU of the Mater Hospital where he received life-saving surgery. He had multiple organ failure and contracted septicaemia which led to him suffering from severe Guillain Barré Syndrome (GBS). This resulted in a complete paralysis of his limbs from his neck down.

After almost two years of inpatient care in the Mater and the National Rehabilitation Hospital Gordon was transferred to AnovoCare Nursing home where he lives and receives 24-hour care. His physical well-being has improved and he is no longer reliant on a trachea and feed tubes.

Gordons family are hopeful that through investing in physiotherapy and occupational therapy further improvements may be possible to enhance Gordon's quality of life as well as speech and language therapy to improve his swallow and speech.

We are hoping to raise funds to purchase equipment such as an Easystand chair and physio equipment to enable Gordon to continue with his goal to eventually get back on his feet. Gordon had a trial assessment of the Easystand on 23/06/17 and Dublin Physiotherapy Clinic have said that he had "excellent results....He tolerated 20 minutes of standing".

Gordon currently has access to an "ISeries"  eye gaze controlled communication device.  Gordon uses this device with his eyes and it enables him to operate his phone, to text and email and control the television and lights in his room.  Help us support Gordon in achieving a greater level of independence.

You find out more about Gordon and how to donate to his trust, please click here.