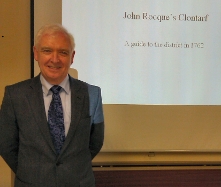 Yet another full house attended the talk at the society's last monthly meeting on Monday 14th May and heard a fascinating account of Clontarf as it was in the mid-18th century, and how it evolved over the next two hundred and fifty years.

Professor Colm Lennon used, as his reference, John Rocque's 1756 map of Dublin and its environs to recreate a mental picture of Clontarf as it was at that time. This map was the first detailed survey of the county, and its quality and accuracy are so good that places, roads, coastline, and houses are easily recognisable despite the enormous change that has occurred since.

Professor Lennon is an acknowledged expert on Rocque's map and his skill in describing not just how the changes came about but also why they happened made his presentation so enthralling.

The Royal Irish Academy is continuing its publications in its Irish Historical Towns Atlas series and to complement Parts 1 & 2 on Dublin, by Howard Clarke and Colm Lennon respectively, publications on County Dublin are planned.

The first of these, currently being written by Colm Lennon, will feature Clontarf. Publication date is not expected until the end of 2013, but when it does appear it will be a 'must have' book for every house in Clontarf.