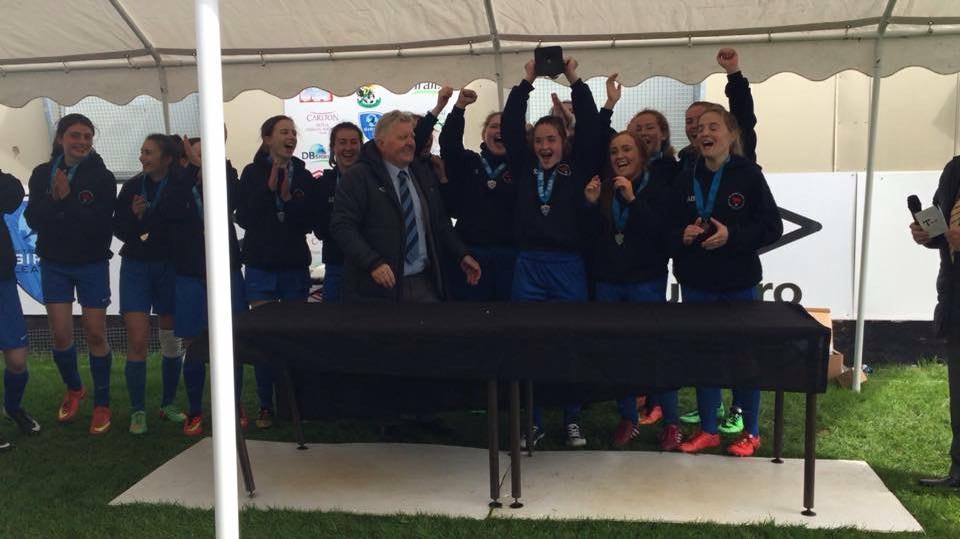 After securing their first trophy by winning the cup final a week ago against St John Bosco the Nuns needed just a point from their last 2 games to secure the double and returned to their Monastery at St Paul’s for an evening kick off against Balbriggan. The supporters anxiously feared squeaky bum time nerves would kick in with the girls so close to making local history and playing against a strong and robust Balbriggan side. Not  that it bothered the almost full strength Nuns too much though as they took it all in their stride once again to maintain their unbeaten record all season and demolish the opposition with consummate ease and a tankard of good altar wine to spare. This level of ruthlessness and impetuosity ranks right up there with the Arsenal Invincible double winning team of 10 years ago and the Soulless inspired legendary Liverpool team of 78/79. All the more impressive as it’s the first ever girls soccer team from Clontarf to complete the double at this level .

The start of the game took a while to settle into a pattern as Captain Sarah Fagan wisely ignored her coach’s advice and elected to play into the strong breeze and setting evening sun for the first half. Once again the Nuns KGB like defence and and creative midfield were the platform for all attacking style of play which opposition teams have struggled to cope with all year. The Nuns scary defence led by the Mother Superior Hannah Lyons were first to the ball all day with Tara and Aoife (aka The Enforcer and The Impaler) putting in gravity defying tackles all day which Vinny jones and Denis Wise would have envied. They were supported too by Heather who chased the Balbriggan best player Claudia around like Tom and Jerry all day, a great clash between these pair of live wires. Schumacher Brennan looked ruthless behind them in goal as herself and the Mother Superior snarled at each other like the odd couple all evening – curiously this pair always play better when they’re grumpy.

In central midfield today were our charging bull Sarah Fagan and Ailbhe Fortycoats Byrne who ran the show and mopped up any 50/50 ball with Lucy and Hannah Mac operating in wide positions and carving up Balbriggan like a Christmas turkey. The slick passing and clever interplay with the 2 strikers Aoibhe and Hannah Walsh was a joy to watch, the strikers movement and speed as usual were a handful. The Balbriggan keeper Bojangles (Bo for short to avoid any confusion with late night clubs) had a busy evening and was brave and impressive in goal making save after save from Sarah, Ailbhe, Hannah Walsh and Aoibhe. After 20 minutes of classy but fruitless football, the Nuns cracked open the cellar  when Velcro Heels Hannah Mac showed great skill and composure after being put through by Sarah to round the defender and slot home the opener past Bo who had no chance. Ailbhe then grabbed an excellent and near identical second goal after a great pass from Lucy who was slaughtering her marker.

With a couple of minutes to half time Hannah Walsh got the third goal after Balbriggan floundered and failed to clear a clever corner from Aoibhe. The tireless Sarah Fagan once again was playing a captains part leading by example and driving the team on from midfield. Three nil to the Nuns at half time turning with the wind in their backs for the second half. Aisleen and Khloe came on for Aoibhe and Hannah Walsh to make quite an impression with bundles of energy and some very creative passing movements .

In the early stages of the second half The Nuns grabbed two more goals when Lucy (Crazy Horse) tore through from midfield to smash in a fantastic goal and then Sarah deservedly got on the scoresheet after weaving a meandering path through Balbriggan at speed like a lava making its way down Krakatoa at speed and then finishing it off with the calmness of Nun saying her vespers at bedtime. Some switches were made with 20 minutes to go and the scoreline now 5 nil. The versatile Lucy dropped into her altar ego Arturo Vidal at centre half mixing steel with silk and speed to block out any danger.  Hannah Mac moved across into central midfield and The Mother Superior took a siesta in goal for the last quarter as Schumacher Brennan was bored witless and in danger of a calamity . Some exhibition football from the Nuns followed who were now show boating but chances were either missed or brilliantly saved by Bo, one in particular from a rasper by Aoibhe was outstanding  as the speed of Aoibhes shot must have clocked 120MPH. As the Blue Nuns juggernaut pulled into Grand Central at the finish with the league trophy on board, the jubilant Nuns ran wild at the end of the game to celebrate their historic deeds.

Nun of the match today went to  Captain Sarah Fagan who inspired the Nuns all evening with surging runs and incisive passing. The 20 game season has been long and hard for the Nuns who never wavered, remained defeated and stood up in all sorts of conditions and against some great opposition along the way. They must be applauded for their achievements now, with 18 wins and 2 draws and a plus 50 goal difference and were a shining example to the case for intelligent high octane football all year. This team are the first girls soccer team to taste success and we hope will inspire others now to follow in their footsteps in future years. Congratulations to the Blue Nuns on delivering the double, you have done Clontarf proud.