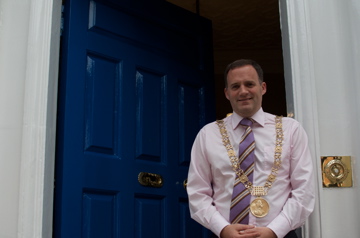 Earlier this week, we caught up with Naoise Ó Muirí, the current Lord Mayor of Dublin in his new city centre residence.

As a local councillor in the Clontarf Ward, we got his view on some local issues and he also speaks about his city-wide role over the coming 12 months.

Q: The role of Lord Mayor dates back eight centuries. With that sense of history, how does that make you feel to be in the role?

It’s a huge honour. It dates back so long, and, from what I’ve seen in the last few weeks, there’s a great respect in the city of Dublin for the position of the Lord Mayor, irrespective of who is in it. There’s great respect for the office. It’s just a huge honour.

Q: And the building has a long history in itself, it’s one of the oldest buildings in Dublin. You moved in in the last few weeks?

Yes, we moved in two weekends ago. One of the roles of the Lord Mayor is to give guided tours, so myself and Finoula had a training session for an hour and a half this week, in terms of a house and its history. It was actually built by Joshua Dawson in the 1700s, who was a civil servant and a property developer at the same time, working in Dublin Castle. We may not have learned a whole lot in the interim about civil servants and property developers!

Q: And you have a young family, two young girls. How are they settling in?

They’re getting used to it. It takes time, it’s a big move for them. They’re still in school, so we’re shuttling them out in the morning and going back out to get them back in the evening, so that’ll continue. There are downsides. There is a lot of noise on Dawson Street, especially on Friday or Saturday night, it’s not as quiet as Clontarf.

Q: The parents amongst us will wonder, have they broken anything yet?

Back home, it’s Normally Harry’s or The Goose. We don’t really go that often. Now that we’re in town we were at the 37 last weekend and we go to Kehoe’s occasionally. The Dawson Lounge can be very busy. All of them are close by and within a short walk.

Q: The role itself has a significant ceremonial element, but clearly there’s a significant influence the role can have. Can you tell us a bit more about the areas you intend to focus on?

Well, the first thing is tourism. I think the city has been terribly under-promoted over the last few years, both in the country and abroad, and I think we can do a lot better. Tourism is a big focus, and it will be events-driven, in a sense; making sure they’re well promoted and people work together. We have The Gathering next year, we have festivals coming up in Clontarf. All of them need to be well promoted. I think tourism is a practical thing, it’s about getting feet on the street, and everyone working together.

Digital is another area. I have a technology background, so the whole area of digital, whether it be in terms of the democratisation of the city, pushing the digital hub along a bit, or other areas such as digital and social media, would be of interest to me. On the events side, generally. On the day of the election, I wanted to portray myself as a happy warrior for the city, trying to fight for it, but being upbeat at the same time.

Q: The Gathering is coming up next year and 2014 the year after. There’s certainly a lot of excitement for it. Clearly there will be a strong focus on Dublin. Do you see a big role for suburban locations in terms of providing tourism support for the City?

I do. There are plans for New Year’s Eve already. We had a small event for the first time in a long time in the city last year, but now the concept of a procession of light is being looked at, so you’d have a procession of light coming in from each of the suburbs, like Finglas, Clontarf, all around the city. People literally carrying lights into the City Centre. Something like the Vikings gathering in Clontarf. That festival in Clontarf, I’m doing a piece tomorrow down in the Liberties, RTE are doing a series of six programs in the run up to The Gathering. The Liberties is an area of focus, and Brendan Grace is coming back and doing something there.

The planning is still going on, there’s a lot happening. Not just in the City Centre itself, but all around it.

Q: 2014 is also around the corner, what are your thoughts on that?

It has huge potential. I was speaking to the ambassador for Norway relatively recently, and he said the king of Norway was interested in coming to Dublin as part of the commemorations, and we had the Danes over as part of the ESOF, the European Science Open Foundations Conferences, and they feel like coming over. So I think there’s a bit of debate in Scandinavia about who the real Vikings are. I think it’ll be a good festival and Clontarf will be a big part of it.

Q: It’s tricky isn’t it, because while it’s clearly a national battle that is being commemorated, there are locations that are significant throughout Ireland.. Killaloe, Clontarf, and a number of other places in Dublin, and there is the Scandinavian element as well. Obviously there’s a huge opportunity to develop the Northern European tourist market. It seems to need somebody to put it all together. The Minister has made a statement that it’s on their radar, there’s also a key role for the DCC, as well as interested groups in the localities. How can it all be pulled together?

Q: You spoke about ‘digital’, can you expand on that? How do you see the Lord Mayor having influence in that area?

We’re hoping that DCC will take a greater role in the digital hub, it’s a good little unit down there. There’s a lot more that can be done in terms of digital start-ups. I think if the city was involved you could do more about venture capital and looking for venture capital and funding small business, which may not be happening there at the moment. Obviously the initiative around free wi-fi is being worked on at the moment, providing it in the city and public parks. Democratisation is the whole idea of using digital to get democracy working better, through online plebiscites, or through other ways of online engagement. loveclontarf.ie is a great example of a website that has good engagement. These are the things, from the city perspective. It’s all democratisation in one way or another. I’m not really into amorphous stuff, I prefer specifics myself. 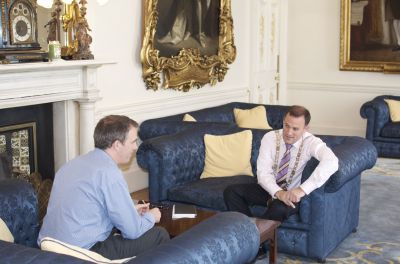 Q: Dublin Bike Scheme has been hugely successful. One of the most successful initiatives ever run in the city in the last generation. Clontarf is one of the nearest access points from the city centre to the sea for city centre residents and visitors to Dublin.  What’s a realistic expectation on when this could be delivered for Clontarf?

All the suburbs want the Dublin bikes in their location. It brings people there, and it’s a way for people to get into town. It’s a discussion that’s ongoing at the moment. There’s a point beyond which the viability of the scheme comes into question. There’s a critical mass needed in terms of advertising and footfall to make it work. That’s a discussion that’s ongoing. I’d love to see it rolled out, but there’s a cost to it.

Q: You were involved last year in the Flood Defence Scheme at a local level in your role as councillor, working closely with the Clontarf Residents’ Association and Clontarf Business Association. Over the last six months, the progress on the scheme has stalled. Do you see any influence that the Lord Mayor can bring to that process?

Q: The Clontarf Business Association is very active in Clontarf, and they’re organising two key annual events and we’d obviously hope to see you there, the Christmas Tree Lighting festival in November and the Summer Viking Festival next year on the promenade. That’s something you’re supportive of, local community involvement organising their own events?

Yeah, absolutely. But it’s funny, I’ve always wondered why suburbs within the city shouldn’t be twinned with other areas. I mean, 2014 would be perfect for Clontarf to twin with somewhere else that has Scandinavian links. There are lots of opportunities there. Twinning shouldn’t just be for towns down the country.