Information from DCC regarding Sea Wall

Councillor Sean Haughy has been in contact with us after receiving some documents from Dublin City Council which may help with the public’s understanding of the ‘Sea Wall’ .

***Scroll to the end for informative images***

1. What does the Sutton to Sandycove Cycleway project involve?

The project involves the construction of 2 km of cycle track between the Causeway Road / Watermill Road junction and Bull Island Road at the Wooden Bridge, flood protection measures and the laying of a new trunk water main. The scope of the flood protection measures includes the construction of two new sections of retaining wall and improvements to the existing sea defence wall. These works include height adjustments to the existing sea wall to ensure a statutory minimum level of flood defence is provided plus an interim allowance for global warming sea level rise and wave action.

2. Why is the flood defence required?

There is a requirement to build the wall to protect against coastal flooding and the height is the minimum required to protect the area of coastline in question. To put a context to this, the tidal event of 3rd January 2013 was level with the lowest portions on the roadway. Any significant wave action on this would have caused splashing onto the roadway. In addition, tide levels in this area, which are recorded as having risen by 90mm over the last 15 years or 6mm (1/4 Inch per year), pose a significant threat to the City. In a coastal area deeper water level will generate higher waves. With large portions of Bull Island likely to be flooded in the future due to a rise in sea levels, this section of the coastline will be much more exposed to wave action.

3. Was Planning required for this project?

The proper Part VIII consultation procedures were followed. The proposed scheme was advertised on the Dublin City Council website and also in the Irish Times on Friday 14th December 2012. A total of 14 site notices were erected at key locations from just south of Wooden Bridge to just north of Causeway Road including at all major traffic junctions along that route.

Plans and particulars of the proposed scheme were available for public inspection for a six week period up to and including Monday 4th February 2013 at the following locations and times:

The proposal was presented to the North Central Area Committee on 17th September 2012 and on 19th November 2012. A public information meeting was held on Tuesday 15th January at 7.30 p.m. in Belgrove Girls School Hall, Seafield Road. This meeting was hosted by the Clontarf Residents Association and was attended by circa 180 people. A follow-up meeting was also held at 3pm on Friday 10th May 2013 in Conference Room 2, Northside Civic Centre, Bunratty Road, Coolock, Dublin 17. Public representatives and residents attended this meeting. The National Transport Authority and their project consultants Roughan & O’Donovan were present and dealt with any additional or new enquiries that had not been addressed in the already comprehensive consultation process.

Planning approval was granted on Monday 13th May 2013.

4. What consultation took place as part of this process?

3 separate presentations were given to the North Central Area Committee

September meeting 2012:- The scheme was first introduced to the area members.

March Meeting 2013:- A report on the part 8 public consultation presented to the area Committee.

Dublin City Council fully engaged engaged with the Clontarf Residents Association during the Part 8 process who kindly assisted in getting the information out to the local residents and also facilitated hosting the public information meeting.

A public information meeting was held on Tuesday 15th January at 7.30 p.m. in Belgrove Girls School Hall, Seafield Road. This meeting was hosted by the Clontarf Residents Association and was attended by circa 180 people. The aim of the meeting was to inform the public about the content of the part 8 planning application. It took the form of a presentation and a question and answer session. The plans were on display and staff at hand to explain them.

A follow-up meeting was also held at 3pm on Friday 10th May 2013 in Conference Room 2, Northside Civic Centre, Bunratty Road, Coolock, Dublin 17. A number of  public representatives and residents attended this meeting.The National Transport Authority and their project consultants Roughan & O’Donovan were present and dealt with any additional or new enquiries that had not been addressed in the already comprehensive consultation process.

This part 8 planning application was lodged on the 14th December 2012 with the closing date for submissions of February 18th. A total of 43 submissions were received including submissions from representative groups such as the Clontarf Residents Association, An Taisce and the Dublin Cycling Campaign.  The submissions were considered and consequently two amendments to the scheme were introduced. The report on the Part 8 Planning application is on the agenda for the May Full Council meeting.

Several representations from area members were received on the project since the report on the public consultation was presented to the Area Committee. These representations (9 in total) were responded to in detail with the consultants preparing reports to address the engineering issues as appropriate.

Members of the public were met on site at two meetings on 23rd of April 2013. Representatives from Dublin City Council, the National Transport Authority and the design consultants were present. In total the enquiries and concerns of 6 households were addressed. The consultants then prepared a report on the issues raised and this report was circulated to the local Area Members.

Enquiries from members of the public were also addressed by telephone. Several phone conservations were held explaining the scheme and addressing the concerns raised.

A letter drop to residents and business owners took place in April 2015 in advance of the works commencing.

5. Will there be a loss of some sea views near the Causeway Road?

The height of the wall will have no impact on sea views for pedestrians or cyclists on the seafront. The maximum height of the flood defence wall along the route will be 1 metre (3ft 3 inches) and will average out at 0.8 metres (2ft 8inches). Pedestrians on the St Anne’s side of the roadway, whilst having a clear view of Bull Island, will have restricted views of the sound (inlet) between Bull Island and the newly constructed wall.

Motorists driving the section of roadway (600 metres) opposite Saint Anne’s Park will have significantly restricted views.

30% of it or 475m will stay at the same level and remain largely untouched except for replacement of lost stones, pointing and other minor repairs.

7. The new wall looks vulnerable to graffiti – can a different finish be supplied?

The current finish complies with the specifications of the Part 8 planning permission that was granted. However a change to the current finish is currently under consideration by Dublin City Council.

8. Was the option of a constructing a glass wall considered?

The new flood wall under construction was approved by An Bord Pleanala following public consultation, as well as Part 8 Planning approval, and following a public consultation process for the cycleway, watermain and flood defence. It is designed to the national standard together with an allowance for sea level rise due to global warming.

A glass wall was considered, however,

1. There would be a significant difficulty with it handling impacting waves which ruled out this possibility.

2. This would involve rebuilding most of the existing sea wall, not just a small portion of it under the current scheme

3. In locations in the city where Dublin City Council  has installed glass panels there are very significant maintenance costs due to vandalism.

4. The cost of the glass panels is a multiple of the current flood alleviation measure.

5. The extra cost for a glass panel project would be €5 million to €10 million more than the current proposal, with no funding stream for it.

9. Traffic issues – will it improve safety?

It is envisaged that the average speed of cars on the Clontarf Road will be reduced because of the narrowing of the overall width of the carriageway in areas where it is currently too wide, and by the upgrading of several of the key junctions along Clontarf Road between Wooden Bridge and Causeway Road. In fact it is planned to upgrade and/or signalise the following junctions as part of the works being carried out:

10. Will speed limits be reduced?

It is planned to reduce the speed limit of the section of road from just north of Mount Prospect Avenue to just north of Causeway Road from 60kph to 50 kph. It has already been reduced to 50kph due to the roadworks and it is planned to make this change permanent once the project is completed.

In addition, it is planned to install two radar controlled speed signs along the route to show drivers their speeds as they approach them. The provision of buildouts at junctions will also make it safer for pedestrians to cross these junctions and provide better visibility to turning vehicles.

11. What impact or changes will the project have on parking for residents?

On completion, there will be an overall increase in the provision of compensatory car parking. Issues in relation to parking are being dealt with on an ongoing basis.

12. When will the project be completed?

It is anticipated that the project will be completed in Q4 of 2016. 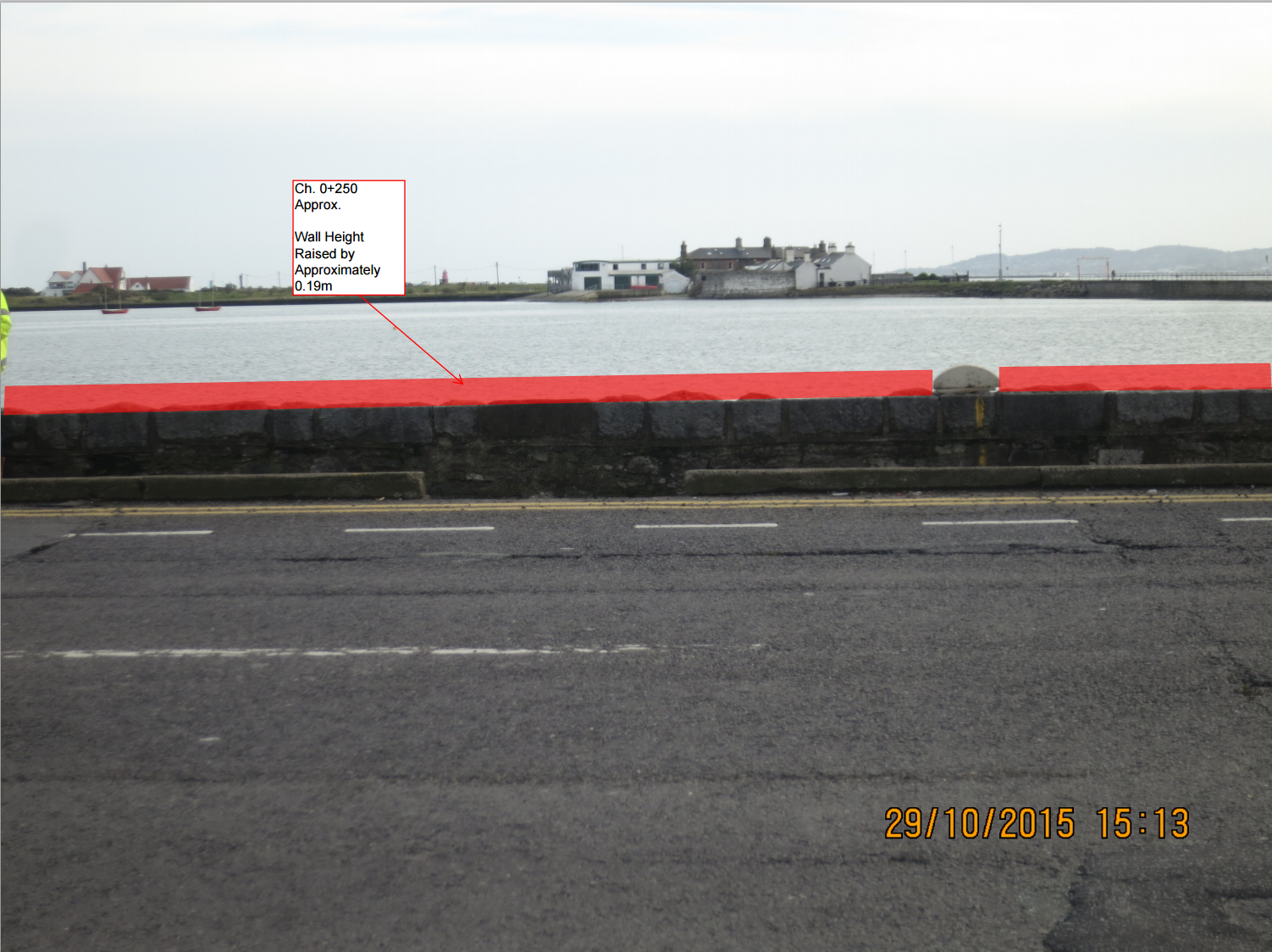 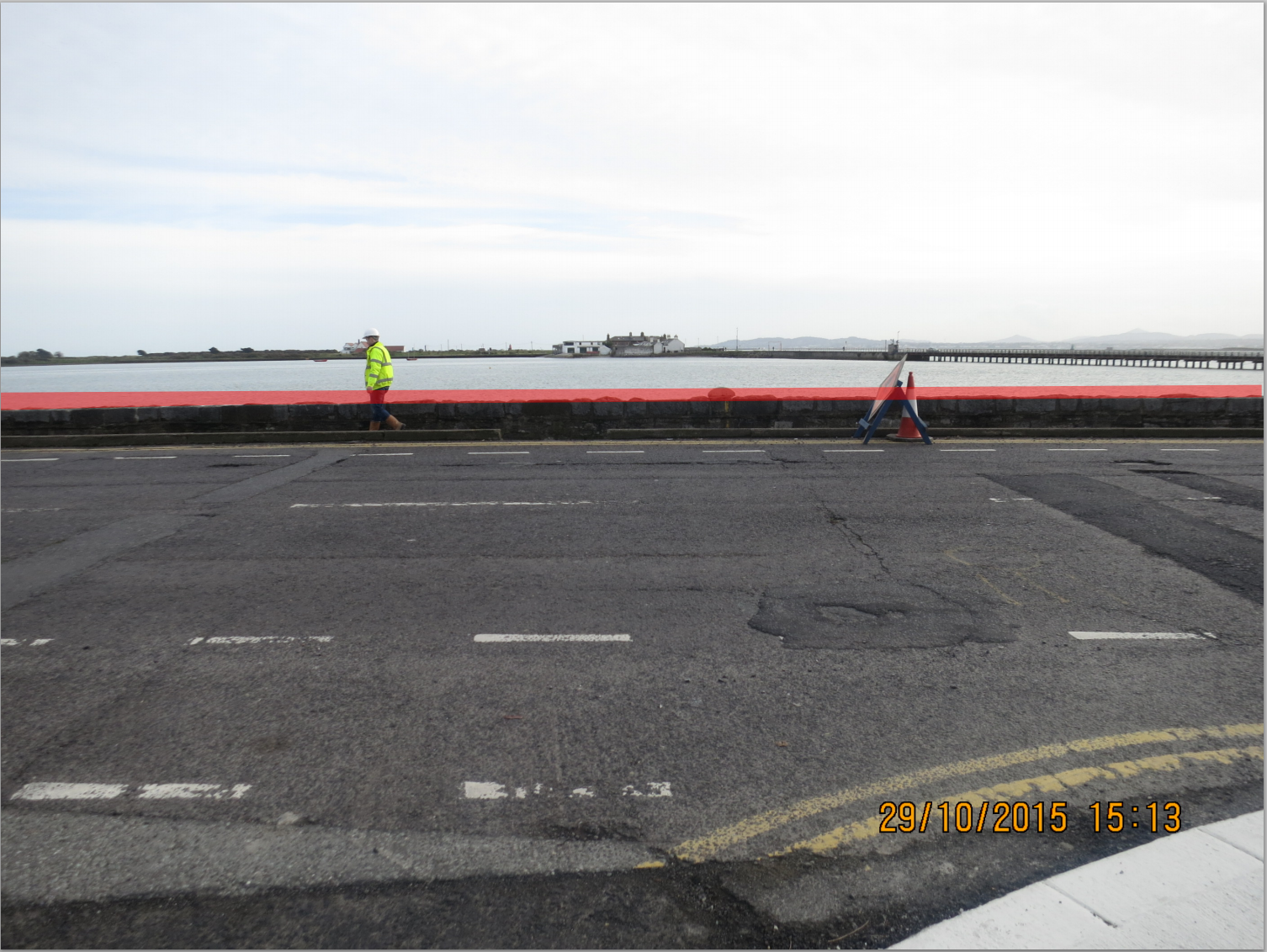 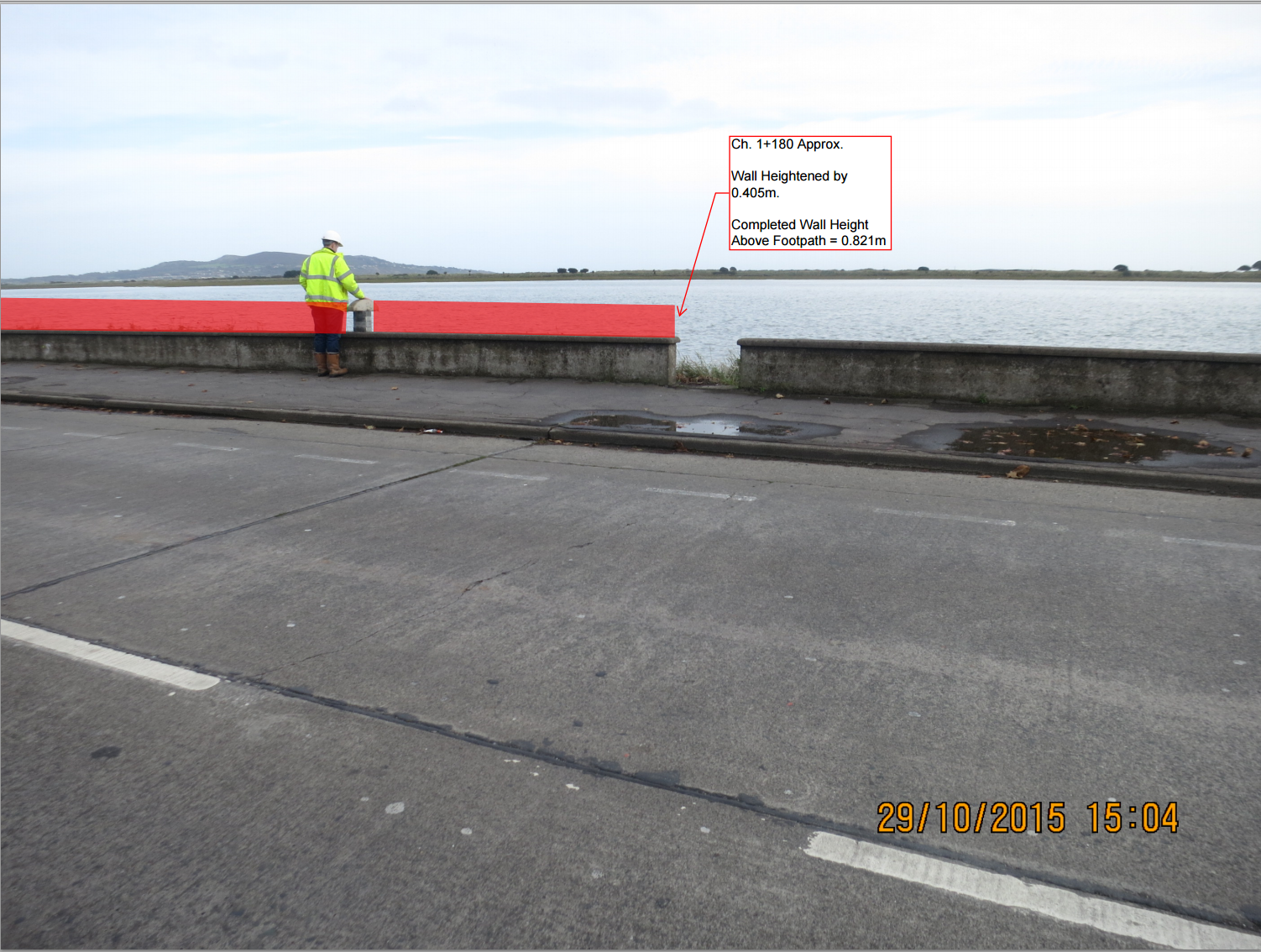 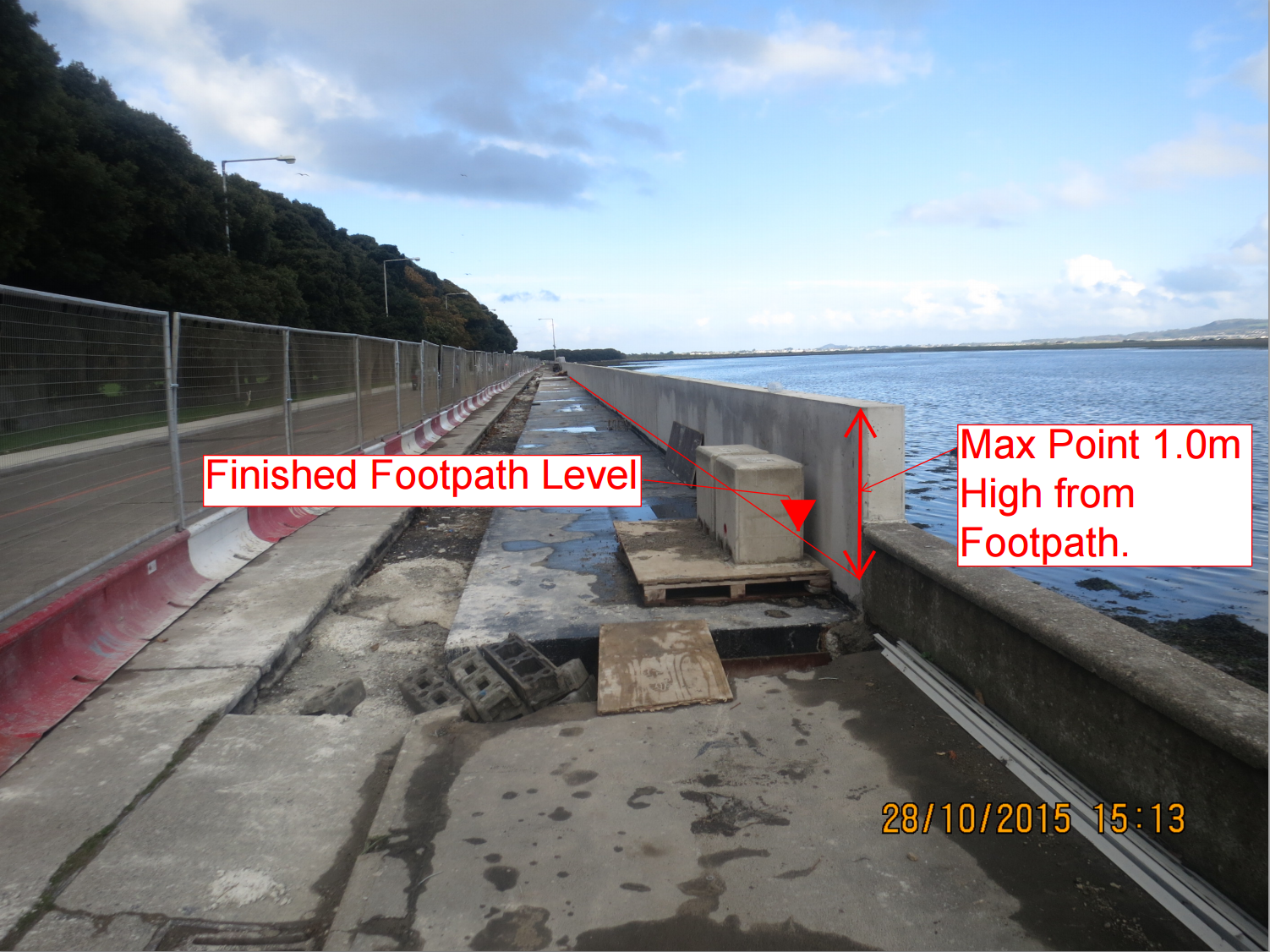