"In The Pool, There's Nowhere to Hide" - Paralympian Ellen Keane 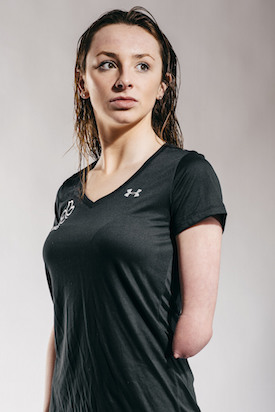 With the 2016 Paralympic Games in Rio drawing ever closer, one of Clontarf's star athletes, Ellen Keane, is clearly more determined than ever.

Ellen will travel to Portugal this weekend to compete in the 2016 IPC European Open Swimming Championships, her final big race before heading to the carnivala capital of the world in September.

Ellen is no stranger to competition; the 'keane' swimmer represented Ireland in both the Beijing 2008 and London 2012 Paralympic Games. At 13 years-of-age, Ellen attained the title of Ireland's Youngest Ever Paralympian, which she now has the honour of holding forever, since the age of eligibility was raised to 14.

Ellen recently sat down with Paralympics Ireland as part of their #morethansport campaign, where she discusses her successes in the past and her determination for the future.

Read the full article with Ellen below, from www.paralympics.ie;

“I started off learning to swim with my siblings and cousins,” she began. “We did lessons together and I actually hated them! I couldn’t wait to finish lessons and never swim again, but then I began racing and discovered a whole different love for swimming and that’s how it all began.

“When I was about eight years old, my dad got in contact with the manager at the time of the Paralympic swim team, Geraldine Conway. Her daughter, Claire, had the same arm as me and had competed at the Games in Athens in 2004. I was invited to compete in an annual disability competition in Lisburn. It was my first taste of competition and I haven’t stopped since.

“I first realized I was good at swimming when I got picked for the senior team when I was 12, while there were kids much older than me still on the junior squad. I got by very easily off pure talent and never realized I had to work harder to get better. It wasn’t until an unsuccessful London Paralympics that reality hit home and I realized I would need to work hard in order to achieve my goals. I’ve committed myself 100% since then and the results are proof of that.

“It wasn’t always easy. My teenage years were hard. It’s not fun being ‘different’. You get inside your own head and all you want to do is be the same as everyone else. I was always so insecure about being ‘the girl with one arm’."

“I used to hide my arm in sleeves to make it seem like I had two arms. I avoided situations where my arm would be revealed.

“But in the pool, there’s nowhere to hide. All you have is your swimsuit, your hat and goggles. This put me in a situation where I had to overcome my insecurities. I also got to meet some great girls from all over the world who are exactly the same as me. I love being ‘different’ now, and I embrace my arm whenever I can,” she reflected.

“Though, I’m a little mean with people I just meet and make one-arm jokes. I find this breaks a tension and makes people more comfortable around me!” Ellen, who is an ambassador for Allianz, added with a laugh.

“Sport has been such an important part of my life since those beginnings. It has given me the confidence to overcome the insecurities I once had about my arm and I hope to be able to be that inspiration to other young people who may be feeling the way I once did. To be a champion, you need to train hard and look after yourself and your diet. You also need to have the right mental attitude and have the passion and drive to push yourself forward. Doing all the right things without being passionate about it won’t get you very far.

“I am so fortunate to have such a brilliant support structure around me. Sport Ireland’s funding means I can focus on my training and dedicate my time to living the athlete lifestyle. Without their support, I certainly wouldn’t be where I am today. I get to do what I love for a living and get to see the world doing it."

“My coach and former teammate, Dave Malone, is definitely who I would list as my inspiration. He has done it all and lived the dream and I’m so fortunate for him to coach me every day. It’s great having someone who knows exactly what you’re going through and he’s great at giving advice.

“I’m hoping now to compete at my third Paralympic Games this year. It’s a bit surreal to be honest. I just hope that if it works out, I can be a help to all those on their first journey and apply all I have learned from my past experiences.

“Ever since I first started competing, winning medals for my country was always the goal. Without dreaming it, it would never have become a reality. My first World Championship medal was a bizarre feeling. It was so strange seeing ‘3’ after my name. I had to double check the board a number of times before I allowed myself to celebrate and, to quote my father, “It only took her 18 years!”

With the IPC European Open Swim Championships kicking off in Funchal, Portugal this weekend, she added: “I’m really excited for Europeans. It’s the last big one before Rio so it’ll be great race practice. I’ve had a bit of an intense college schedule the two weeks leading into the Euros which isn’t ideal, but it’s done now so I’m hoping to be able to rest up and focus all of my energy on the competition.

“After that, I just want to enjoy the ride into the Games. The lead up to a Paralympic Games is intense and exciting and it’s important to enjoy it as well as train hard.

“Looking back, I wouldn't change anything. I've made a lot of mistakes in the past but without those mistakes I wouldn’t be the athlete I am today.

“Success isn’t half as sweet if you’ve never experienced failure.”