Iconic painting of the Battle of Clontarf returns to Dublin

The Clontarf 2014 committee have a very exciting announcement today that has already received widespread national media coverage and has shone a bright spotlight on the Battle of Clontarf commemorations.

This has been a hard-to-keep secret in recent weeks and the back story that includes several twists, coincidences and good timing is well worth the read - see official press release below.

Clontarf, Dublin and Ireland owe a huge debt of gratitude to Kildare Partners for acquiring this important work of art and also to Collette Gill, Chair of the 2014 committee, who has worked tirelessly to have this painting as a central part of the 2014 commemorations. 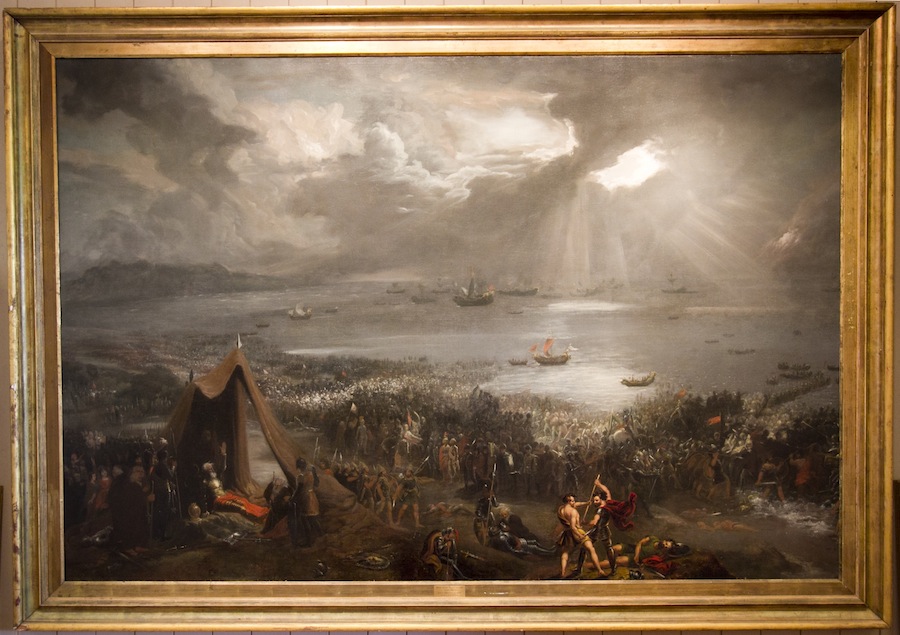 We look forward to the arrival of this iconic work of art and the official opening of the exhibit next month.

The most iconic image of the Battle of Clontarf will shortly go on public display in the Casino in Marino for the millennium commemorations of the battle.

The painting by Hugh Frazer features in many books on Brian Boru and the Battle of Clontarf and is now owned by Kildare Partners who are making it available for the commemorations.

"I'm delighted that Kildare Partners could assist in bringing the painting back to Ireland. It's such a distinctive image of Irish history and it's great to have it back in Ireland." said Emer Finnan, MD of Kildare Partners.

The large painting (3 metres x 2 metres) depicts Brian Boru at his tent in the left foreground overlooking the main battle stretching into the distance with Howth in the background.

The painting will go on free display from 15th March to the 24th of April at the Casino at Marino, which is in the care of the Office of Public Works (OPW). Pauline Kennedy of the OPW said "the Casino is an appropriate venue for the painting as the buildings' creator, James Caulfeild, 1st earl of Charlemont (1728-1799) was widely acknowledged as a connoisseur of the Arts and the foremost collector of some famous paintings, which have contributed to both the Irish National Collection as well as many International collections of note. The location of Casino Marino on a hill overlooking the panorama of Dublin Bay is an ideal viewing point from which to plot the scene of the battle using the paintings' elevated landscape as a lens to view this iconic landmark in history"

Collette Gill, chair of the Clontarf 2014 committee has been working on this project behind the scenes for the last few months. "Our committee is delighted to have this iconic painting of the Battle of Clontarf back here in Ireland for the 2014 millennium commemoration and the Casino at Marino is such a fitting place to show this wonderful painting. The elevated site of the Casino would have overlooked the battle one thousand years ago. We are very grateful to Kildare Partners for returning this painting to Ireland for the Irish public to enjoy during this important commemoration."

The painting couldn't have been much further from Clontarf. It had been on display at the Isaac Arts Centre in Hawaii and prior to that was in the personal collection of American philanthropist Mr George Isaac. Mr Isaac, who has Irish ancestry, purchased the painting from a private collection in Ireland 35 years ago. In the 1990's Mr Isaac donated over 20 paintings to the Isaac Art Centre, then being constructed and financed by him.

A series of coincidences has led to this iconic painting returning to Ireland after a long absence. Collette Gill wrote to the Isaac Art Centre requesting permission to reproduce an image of the painting of the Battle of Clontarf. Meanwhile the painting was acquired by Kildare Partners who have subsequently made it available to the Clontarf 2014 committee. As a result, this iconic painting of the Battle of Clontarf has now returned to Ireland after an absence of thirty-five years in time for the one thousandth anniversary of this seminal battle in Irish and European History at Easter 2014.