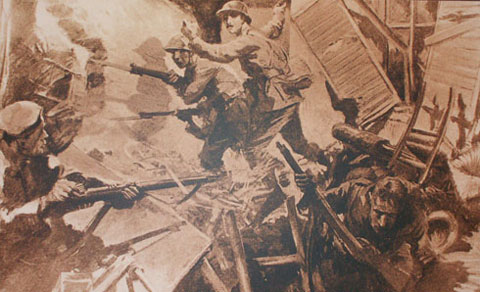 2014 has been an important year for everyone in Clontarf. The Battle of Clontarf celebrations have brought us all closer together as a community, as well as enriched our appreciation of the dense history that our island plays host to. However, we must also remember that 2014 is an important anniversary for another reason.

Yesterday, Sunday 13th of July, saw a huge crowd gather at the Royal Hospital in Kilmainham for the National Day of Commemoration ceremony. President Michael D. Higgins and Taoiseach Enda Kenny were in attendance. The ceremony remembered the Irish people who died in the First World War and in the Battle of Clontarf.

Taoiseach Enda Kenny made a speech in which he thanked all the Irish people who fought and died during the war. This year marks the 100 year anniversary of the war. World War I began on July 28th, 1914. Over 200,000 Irish men fought in WWI, and it is believed that over 35,000 of them lost their lives.

"It is fitting that we remember here today all those Irishmen and Irishwomen who died in past wars or on service with the United Nations. This year in particular, we remember all those who died in the Great War" Kenny said.

Rt. Rev. Dr. Michael Barry said: “We recall that our history is marked with conflicts. In this year we especially remember the Battle of Clontarf and the beginning of the first World War.”