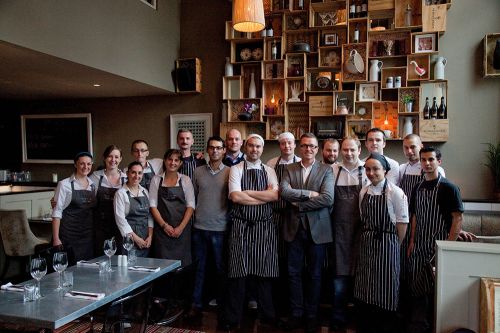 The team at Downstairs Restaurant were celebrating on October 4th, as they received news that they had been awarded the highly coveted Bib Gourmand from The Michelin Guide 2013.

One of only 3 awarded in Ireland this year bringing the total to 14 in Ireland.

In the unique “language” of the Michelin Guide, the Bib symbols indicate the inspectors’ favourite establishments, offering high-quality products and services and good value for the money.

Bib is short for Bibendum, the character created in 1898 from the imagination of the Michelin brothers, André and Edouard, and the pen of cartoonist O’Galop. Over the years, Bib—the one and only Michelin Man—has become the Group’s “mascot.” In the Michelin Guide, Bibendum’s head is a familiar, widely recognised red symbol.

The Bib Gourmand symbol was created in 1997. It indicates a restaurant offering good food at moderate prices. For the 2013 Guide, the price of a full meal (excluding drinks) is under 40 euros in the Republic of Ireland.

Well done to everyone at Downstairs!