Donna Cooney - We Will March and Blow our Bulls Horns Until the Wall Falls! 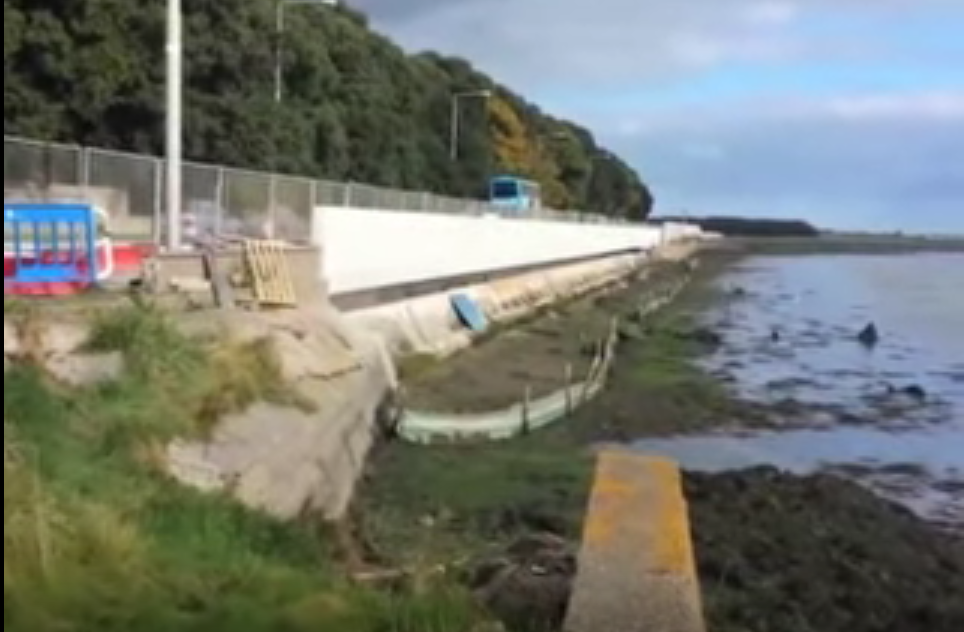 In a striking admission of planning failure Dublin City Council last night announced that they will alter the sea walls. This shows a complete lack of forethought and highlights the inadequacies of the consultation process. At this very late stage in the development, they are only now realising the effect that this monstrous wall is having on residents. But they still stubbornly insist that they will not alter the height, so anger will persist, they must now listen to residents' concerns and take their suggestions onboard. (Public Meeting TONIGHT, 7.30pm, Clontarf Castle).

Only this Summer, Dublin Bay was named a biosphere reserve by the United Nations Educational, Scientific and Cultural Organisation (Unesco) in recognition of the area’s unique ecological habitat and biological diversity.

It was heralded as a huge boost to Dublin tourism by Fáilte Ireland.

Minister for Jobs Richard Bruton said he hoped Dublin Bay’s new status would “act as a magnet” for tourists to visit the heart of the capital city and learn about the bay’s unique wildlife.

Maryann Harris, Superintendent for Biodiversity at Dublin City Council, said Dublin Bay’s ecological habitat had become internationally recognised due to the large numbers of migratory birds that arrive every year from the Arctic, Greenland, Canada, Iceland, Russia and African countries. “We’re on what’s called the Atlantic flyway. It’s like a highway for migratory birds,” she explained. “Some of them breed here and some of them just come here to feed. Then they fly thousands of kilometres back home again.”

The Irish Times wrote that members of the public could also enjoy the area’s biodiversity through walking, swimming, bird-watching, sailing, kite and wind surfing.

Meanwhile, however, plans were afoot by Dublin City Council to build a wall that would effectively destroy our view of this beautiful unique location.

In reply to questions put to Dublin City Council, the Council states that there is a requirement to build the wall to protect against coastal flooding and that the height is the minimum requirement to protect the coastline in question.

Yes, climate change and the increase in sea levels do bring the very real and increased risk of coastal flooding and I am very well aware of the issues of flooding and climate change. But I would question the need for this flood defence at this location and here are the reasons that for this assessment.

Questions arise in a review of the national consideration report of flood risk outcomes: Eastern CFRAM Study Strategic Environmental Assessment - Scoping Report as to the suitability of these type of flood defence and the extent the method used in part 8 of the  planning application.

Plans or projects with the potential to have significant impact on certain designated European Sites, i.e. Special Areas of Conservation (SACs) or Special Protected Areas (SPAs), must undergo Appropriate Assessment (AA) in accordance with the Habitats Directive (92/43/EEC). Appropriate Assessment of the Eastern FRMPs is being carried out in parallel with the Strategic Environmental Assessment process.

In this report it states that consideration should be given to landscape & visual amenity including; the landscape character, amenity value, tourism and recreational use.

The objective is to protect and, where possible, enhance visual amenity, landscape protection zones and views into and from within designated scenic areas, "so do Dublin City Council regard a concrete wall an enhanced view?"

As part of the catchment flood risk assessment and management, there has been some draft tidal flood extent mapping.

These draft flood hazard maps for the Clontarf area show little risk from tidal flooding at the location where the wall has the greatest impact of visually obstructing the view of the coast.

The risk of flooding is evident in at the Southside of the  wooden bridge; see map:

In conclusion, there seems to be little need for coastal flood protection at this precise location. The risk from flooding would appear to confirm local knowledge as being most likely from the river or heavy rain flooding from the park which this would be helped by implementing sustainable drainage systems (SuDS)  on a catchment wide basis, land use management (NFM) creation of wetlands, riparian buffer zones, etc.

Like the myth behind the walls of Jericho, which scholars agree was intended to illustrate a theological scheme of obedience to the teaching and the laws, Dublin City Council appear to believe in the myth that there is a need to build concrete walls in Clontarf. But, like the Israelites that marched around the walls until the seventh day when the ram's horn was blown and the walls fell, we in Clontarf love our bay. We will march and blow our bulls horns until the wall falls.

Donna Cooney is a former Dublin City Councillor from Clontarf, who is currently involved with Love Dublin Bay