Dear Frankie at the Gaeity Theatre 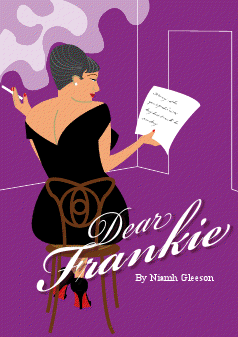 We are delighted to be able to celebrate our own local talent, Niamh Gleeson, whose show 'Dear Frankie', is being co-produced by Five Lamps and Verdant Productions this Spring and is in The Gaiety Theatre from March 26th-31st as part of a national tour.

Niamh is awed by the prospect of one of her plays playing in the famous 1200-seater venue.  “It’s so exciting...I was in contact with her niece recently to let her know all the details and she said that Frankie would be so chuffed – The Gaiety seems like just the right venue for such a lady who lived for showbiz.”

Here's a little extract into Niamh background starting with her early school days in Clontarf's Belgrove Girls School to her inspiration for writing 'Dear Frankie'.

Niamh Gleeson, writer of the acclaimed Dear Frankie, was born and reared in Kincora Road, Clontarf on Dublin’s Northside.  She was educated in Belgrove National School, where both her parents taught.  Her late father, Denis, taught for several years in the Senior Boys School and her mother, Marita, has only recently retired from the Senior Boys School, having also taught for over a decade in the Junior Girls School.

Niamh enjoyed many happy years in Holy Faith Clontarf, where trips to the theatre were part of the school year and an interest in the arts was encourage.   She went on to study English and Economics in U.C.D.  She then trained in the Gaiety School of Acting for two years and worked as a professional actor for several years, before turning her hand to writing.  It was when she started to write plays in which to perform herself, she discovered her calling.  “In the beginning, I wrote to provide work for myself as an actor during the fallow periods.  But then I discovered, that I gravitated towards the process of writing far more than the performance itself.  Over the course of a year or two I completely changed course and switched my attention to writing.  And I’ve never regretted it.”

She acknowledges many people who’ve helped her on the path to becoming a playwright.  One of these individuals is fellow Clontarfite, Róisín Lonergan, who runs the Theatre Performance course just a mile or two up the road in North Strand’s PLC college, Marino CDVEC.  Róisín and Niamh initially met when Róisín coached Niamh for a performance diploma when Niamh was still a teenager.  They kept in contact and it was Róisín who first encouraged Niamh to write a play for her students in Marino to perform.

“Up until that point, I’d only written shows in which to perform myself.  In hindsight, Róisín was really throwing down the gauntlet to me.  I did some workshops with her students and then went away and wrote a piece for them.  It was performed in the New Theatre in Temple Bar in 2002.  I suppose it was from that moment on that I felt I could call myself a writer.”

Niamh’s play was received well and since then, she has been writer-in-residence for Marino CDVEC and writes a play annually for each group of students.  For the last eight years, these have been plays written and performed for children.  Niamh is enthusiastic about Róisín’s achievements over the years.  “Róisín has worked so hard to develop links between Marino and local inner-city schools and each year, over two thousand local children are bussed in to the Seán O’Casey Theatre in East Wall to see the show at Christmas time.”

A professional theatre company, The Five Lamps Theatre Company, was formed by Niamh and Róisín in 2007.  “It seemed like a very natural progression.  We’d been collaborating for years at that stage and we both were interested in bringing new writing for an adult audience in addition to the children’s shows.”  The Telephone Exchange was the Five Lamps’ first play and was performed in July 2007.

National tours in 2008 and 2009 followed and The Mariettas was premiered in 2008.  Both plays focus on the working and domestic lives of women in the 1960s.  This is a period that holds particular interest for Niamh as a writer.  “I became fascinated by the changes that have taken place and the yawning gap between the opportunities that a woman enjoys today, versus the choices they were faced with in the 60s and 70s.  It’s particularly easy to relate to because this is our mother’s generation, it’s so recent and yet the rules have been utterly changed.”  Both The Telephone Exchange and The Mariettas feature all-female casts and actors take on several characters within each piece.

However, since 2006, even before the creation of the Five Lamps, Niamh was determined to write a play about the life and times of Frankie Byrne.  Having seen the Mint Productions documentary, she was struck by Frankie’s incredible life story and was also astonished that she herself and never heard of the woman who once was queen of the airwaves.  “It was fascinating to me that people under the age of forty in the country struggled to recognise the name and yet, for those over forty, it was instant recall.  They could hum the theme tune, recite the first few lines of her radio programme and had very strong memories of Frankie, but she seems to have vanished from the public eye once her iconic radio show finished up in 1985.”

She set about researching Frankie and her programme and found, to her dismay, that all but two of the two thousand recorded shows had been wiped and recorded over.  Then she discovered that Frankie had also written a column for the Evening Press following the same question and answer format.  Patrick O’Dea, (also from Clontarf) who works in Trinity in the School of Social Work and Social Policy department, published a collection of these in the early 90s and she managed to get her hands on a copy of the out of print book.  These letters and Frankie’s answers provided rich material for Gleeson who then went on to contact Frankie’s friends and family.

Having gotten the green light from Frankie’s inner circle, Niamh then went on to write Dear Frankie which has been warmly received by audiences across the country.    “There’s a huge amount of humour in the play”, she points out, “because Frankie was a really funny lady.

She was quick-witted and charming and she loved to hold court both on and off-air.  This is deeply contrasted by the anguish and suffering of a woman whose only child has been given up for adoption and is using alcohol as a crutch to survive.  And this is what attracted me to the writing this play – it has all the elements for both great tragedy and comedy.”

We wish Niamh every success at the Gaiety Theatre.