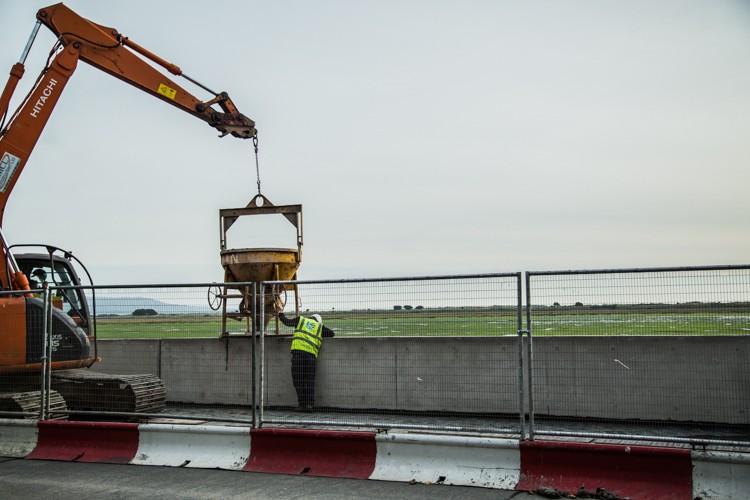 The following is a Media Release from the Dublin City Council Press Office dated 16th November 2015. We expect the CRA and other local groups will respond to this Press Release in due course. We will share these updates with our readers over the coming days.

A number of issues have been reported in the media in recent weeks in relation to aspects of the current flood alleviation, cycleway and water main works along Clontarf promenade, which require clarification.

The issues can be categorised under two headings firstly: the height, material and finish of the wall and secondly: planning questions relating to the times during which work may take place and the planning condition relating to the establishment of an environmental liaison committee.

1.Height of the wall: In light of some public concern relating to the rationale supporting the height of the flood defence wall we are arranging to seek an independent expert opinion to examine the technical information that informed our decision to erect the flood defence wall, and secondly, to examine if the approved height is a proportionate and correct response to this information. We understand that local Councillor Naoise Ó Muirí (Chairperson of Environment Strategic Policy Committee) has already suggested this approach.

It should be noted that An Bord Pleanála in granting two previous permissions for projects on the same site which proposed a flood wall of the same height made the following comments in 2008,  "the proposed development represents an appropriate response to flooding risk in the area", and in a later permission in 2011,"the proposed development would represent an appropriate response to identified coastal flooding problems in Clontarf area..". It should be further noted that the rate of sea level rise on which previous calculations were based have been exceeded in the intervening period. The fact that this is an interim solution and 350mm (14") lower than the final proposal was also noted by An Bord Pleanála as minimising visual impacts.

Wall construction material: it is currently proposed that the wall would be constructed using reinforced concrete. A number of people have suggested that the use of glass would be a suitable alternative in terms of providing increased visual amenity. The use of glass was examined previously but was ruled out on a number of grounds as follows: unproven effectiveness in this type of location, installation costs, maintenance cost, limited visibility through it, a long procurement period and a limited life span. Raising the level of a glass wall would be impossible in the future. The installation costs would be a large multiple of the cost of reinforced concrete and would in effect limit the resources available to carry out further flood relief works in this other flood risk areas. Maintenance costs would include constant cleaning, vandalism, marine deposits and age related degradation. While glass walls have been used by the council in other locations, we have not commissioned them in any location which is subjected to regular wave action, nor has any other Council in Ireland to the best of our knowledge. Even if the expected life span put forward by manufacturers of fifty years is achievable for such a prototype, this is far short of that provided by the proposed alternative. It would also constitute a material change to the Part VIII Planning Permission and would require the entire process to be recommenced.

Finish of the wall: The Council has already undertaken to engage with the local public representatives to agree a suitable natural stone finish for the road side of this new wall.

1.Planning issues relating to allowable Working periods: some confusion has arisen in relation to the times at which works can be carried out in the area. There are three distinct planning permissions relating to the current works granted in 2008, 2011 and 2013.. The planning permission in 2013 stated the following in Condition Six , ".. that the development comply with the conditions attached to previously permitted An Bord Pleanala schemes PL29N.JA0008 and PL29N.YA 0008 as amended by this proposal ." ( these previous permissions were the two mentioned above granted in 2008 and 2011). These permissions had very onerous seasonal working constraints, as the 2011 permission included permission to build a seven metre cantilevered cycleway on the sea side of the sea wall and included piling in the lagoon area. The most recent 2013 permission relates to works, the vast majority of which  are on the land side of the sea wall. It is for this reason that the 2013 permission states in Condition Ten, " ..the construction period for works to the lagoon shall be restricted to between March and September each year. Any exceptions sought shall be agreed in advance with the National Parks & Wildlife Service. The timing of all other works outside the lagoon shall be agreed with the National Parks and Wildlife Service.

This is the condition that controls the current works and  it is imperative to emphasise that the Council at no time breached the planning conditions of this permission in relation to permitted working times.

The local community which borders the  project

Ecological groups with a specialist interest in the area

The mathematics are not quite right ( five groups involved but the group is to be limited to four ) but we are making plans to establish the group in consultation with the Area Committee and the relevant groups mentioned. The group was not formed previously as it did not prove feasible to achieve the composition suggested. We did however liaise with Birdwatch Ireland , NWPS and OPW in relation to the works and regular information leaflet drops to the affected community .

The City Council is regularly criticised for its actions, sometimes justifiably so, but our brief is to take a strategic approach to issues which have a general effect on the citizens of Dublin. These decisions can sometimes have a limited adverse effect on a limited number of citizens. In this case, the flood defence wall will impede the view of the sea currently enjoyed by motorists (the view enjoyed by pedestrians most wheelchair users and cyclists travelling on the sea side of the road will not be affected) for a distance of around four hundred metres. The benefit is that the people of the Clontarf area will be protected from tidal flooding for many years to come. We will also deliver on two actions we are regularly accused of not delivering  - joined up thinking (combining a water main, cycleway and flood defence in the one scheme) and forward planning (protecting into the future against an ever increasing risk of coastal flooding). "