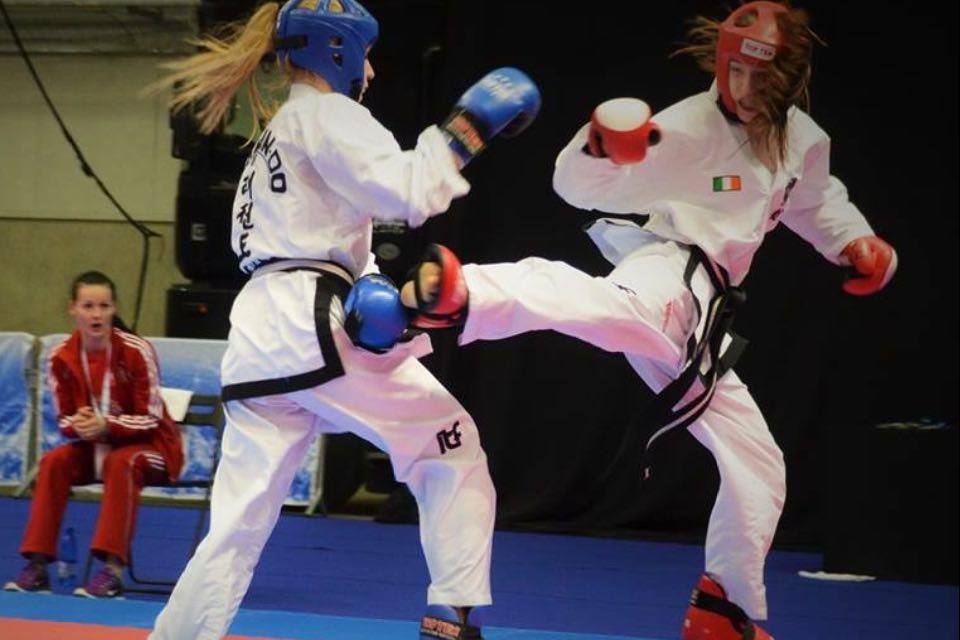 Rebecca Mooney from Clontarf will finish 2015 as World and European Number 3 after another great display at the European Taekwon-do Championships in Scotland last week.

Day one saw Rebecca compete in the individual 1st degree black belt patterns division for the first time in an Ireland dobok (TKD uniform). Rebecca was one of 3 Irish girls in the division taking on the top 38 ranked girls from around Europe. Unfortunately, her two team mates fell early in the competition but Rebecca won her group to secure bronze. Rebecca lost the Semi-final to Italy who went on to take the title.

In the sparring category Rebecca came from behind against Poland in the opening round but went on to win convincingly. Her quarter final was a much closer fight with the Dutch National Champion. The scoreboard bounced back and forward for the entire fight and with 5 seconds left it looked like Rebecca’s challenge was coming to an end, but a last second flurry of punches flipped the score board in Rebecca’s favour at the death.

So to the semi-final and a match with the World Cup Champion at -50kg who dropped to -45 for the Euros. Despite coming from behind to take the lead with seconds left, this time it was Rebecca on the receiving end of a score board flip. A disappointed 15 year old had given everything against the 18 year old World Cup Champion from England and nearly pulled it off but it wasn’t to be. It was a second bronze for Rebecca.

Bronze was also secured in both the junior female team patterns and team sparring events. Rebecca was called upon in the final fight of the quarter final and she won her fight with her -45kg Scottish counterpart very convincingly.

Rebecca can look forward to the 2016 European Championships in Finland next year in what is proving to be a very tough micro weight division.

Rebecca will be dining out in celebration this weekend with her sponsors The Vikings Steakhouse.

Congratulations to Rebecca on her great achievement and to the Ireland squad who finished in 4th place overall!!