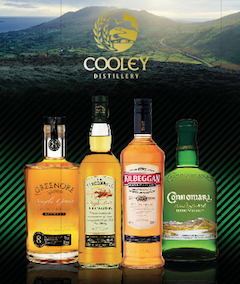 It's not often that Clontarf features so prominently on the business pages of the national newspapers. However, over the last few days the media have been rich in their praise of Clontarf man, John Teeling's stewardship of Cooley Whiskey which last week culminated in the sale of the business (for €73 million) to Beam, a giant in the US drinks market.

Cooley's sales have never been better with a 50% increase last year and further growth expected this year on the back of a huge upturn in demand for Irish whiskey overseas. The deal will give Cooley access to the wider distribution capabilities of Beam which will "put Cooley's brands on every shelf in the country." according to John Teeling.

Cooley's administrative headquarters are at 162 Clontarf Road and the marketing and finance functions are also run from there.

The Teeling family own about one third of the business and the business is run on day-to-day basis by John's son, Jack Teeling.

A testament to John is the universally positive coverage in the business press. It's nice to see a good news story for a change and even better to see it emanate from Clontarf!

We'd like to also acknowledge John's support for the Clontarf Residents' Association down through the years. He has stood with us on the 52 acre issue and has also supported us on the recent flood defence issue.

We wish him well on this latest deal and continued success with his business endeavors.