Congratulations to the Clontarf under 14A ladies team for their win in Feile 2014 Division 2. 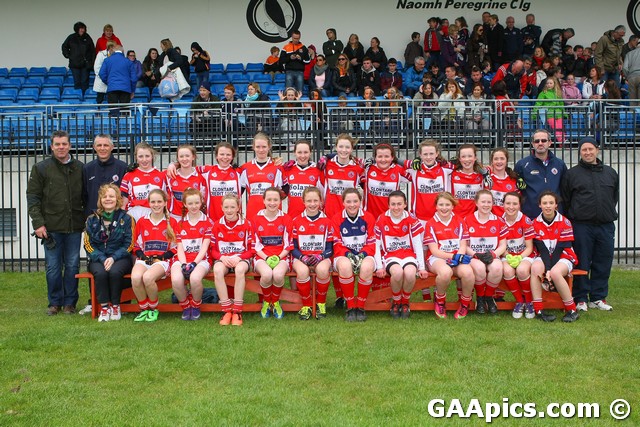 The penultimate Everbuild Feile final of the day saw Clontarf taking on Ballinteer St. Johns. Both teams started well with Clontarf going in towards the goal but the Ballinteer backs intercepted their shots and got the ball away to safety.

Ballinteer then had good chances to score but a free for possession was given away to Clontarf and Caoimhe O'Connor ran the length of the pitch and scored a brilliant long range goal to put her side onto the scoreboard.

A foul on O'Connor gave them a free which she then took a point from.

Clontarf kept the pressure on with two more wides before Ballinteer had a wide of their own. Sarah Brown kept Clontarf's lead growing with two more points to bring the gap to 8 points.

Clontarf continued to keep their stronghold on the game with a second goal from Caoimhe O'Connor and a point from Niamh Corry while Ballinteer were yet to score.

Clontarf kept the pressure on with another wide which was quickly followed by another goal from Corry.

As the second half got underway Clontarf came in close to the goal but the Ballinteer backs were able to keep them out.

Ballinteer brought the ball to the other end of the pitch they forced the Clontarf backs to work hard as they pushed for a score but went wide.

Ballinteer's Anna Horgan took two shots, one from a free, but both went wide; however just moments later she scored a goal for her side.

Clontarf did not wait long to reply though and Caoimhe O'Connor scored her third goal of the game. As some very tight play followed, each side had a series of wide shots.

Just before the final whistle blew, Clontarf were awarded a free and Sarah Browne scored one last point. At full time the score stood at Clontarf 4-05 to Ballinteer's 1-00.