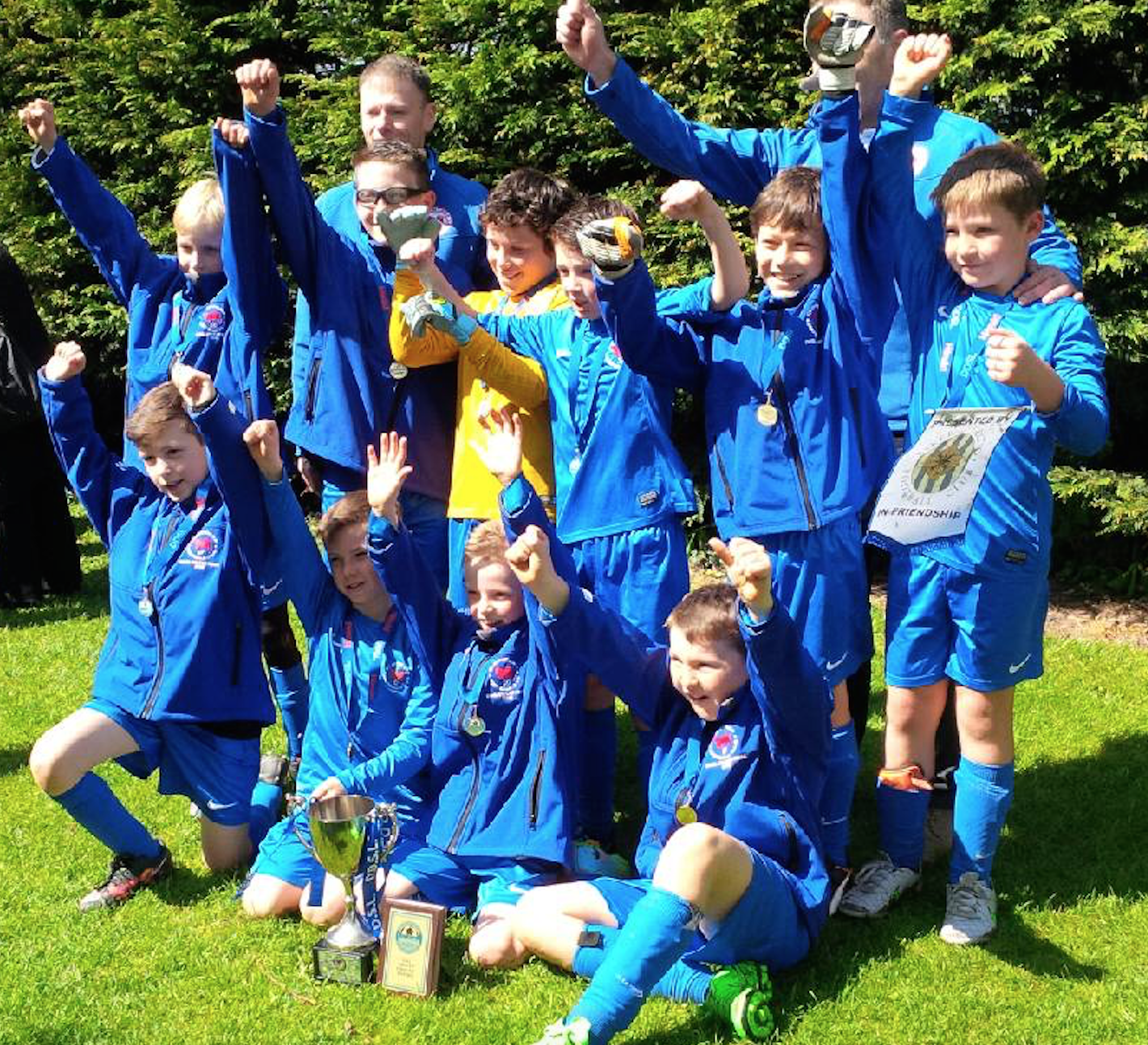 Congratulations to Under 11s, who lined out as slight favourites against a tough Esker Celtic team from Lucan at the AUL HQ on DDSL cup final weekend on Sunday, May 8th.

The weather was glorious and the grounds jam-packed with supporters from teams the length and breadth of Dublin in an electric atmosphere and well run DDSL cup final weekend.

Both teams started nervously for the first 15 minutes in a game of cat and mouse as the Clontarf defence manned by Conor Dunlea and Yura Melders stood resolute and swept any real Esker danger aside. Once the boys settled into a passing rhythm the midfield trio of the formidable brothers Charlie and Harry Digan accompanied by Josh Gordon, started to open up the Esker defence gradually and chances started to appear.

A great through ball from Charlie Digan caught Esker flat footed at the back and found striker Fionn Mc Namee, who rounded his marker and dispatched the ball to the back of the net with the coolness of 007.

The midfield dominance continued for the next 10 minutes as Clontarf bought on fresh legs in Harry Walsh and Luke Chandler with both boys giving Esker plenty to think about and stretching the Esker defenders. After a succession of corners and great work on the left from Harry Digan and Harry Walshe pounced on a loose ball in the box like an urban fox to drive a second past the excellent Esker keeper. Back came Esker who attacked from wide positions and now started to cause real problems for the Tarf defence but behind them, Neil Gallogly was having a fine game in goal and made a couple of sharp one-handed saves and timely interceptions coming off his line when the Barbarians defence was eventually breached. As half-time arrived the favourites were a little fortunate to go into the break two nil ahead. On a very warm day, the boys took on a tank of fuel and some stern words as the second half beckoned. Leo Beary came on to play in goal in the second half.

The early stages of the second half were even. Clontarf wasted some good chances, and inevitably Esker rallied and started to show why they had reached the final playing some very stylish football. The excellent wide players were causing problems weaving their way into the danger zone, but the Tarf defence held strong, now fortified as Charlie Digan dropped a little deeper to help out. A rasper of a shot from the Esker star player drew an equally top class save from Leo to flip the ball over the bar when a goal looked certain.

Eventually, Esker got a deserved goal as their wing man broke through from the left side and shot low to the back of the net giving Leo no chance. For the next 10 minutes, Tarf clung desperately onto their lead with resolute defending with the Tarf penalty box now looking like the Alamo. All of the midfielders of Josh, the two Harry’s and Fionn ran back and covered like Trojans to get behind the ball the tackles were piling in furiously.  As Esker went all out for their equaliser in the last 5 minutes, Josh, Fionn and Charlie created a few good chances and then Luke was very unlucky as his shot from just outside the box whistled over the bar. Finally, the mercurial Harry Digan weaved a magical dance into the Esker box with the ball stuck to his feet like Velcro and then calmly smashed the ball into the back of the net to kill off the game, breaking the Esker hearts in the process.

As the final whistle blew, the Clontarf boys were as ecstatic as they emulated their blues brother at Leicester earlier in the week and celebrated wildly at the end of the game, although Andrea Bocelli was nowhere to be found. Captain Fantastic Charlie Digan lifted the SSG cup to a great cheer, and the boys spent the rest of the day basking in their success. Great achievement for the team and the club as the competition in the Dublin schoolboy clubs scene is so strong. Man of the Match was a close run thing with excellent performances from Josh, Fionn, the 2 Harry’s,  Yura and Leo (in the second half). However, for showing a great example as team captain and working hard at both ends of the pitch to create chances and then defend when the pressure came on, MOTM went to Charlie Digan.

Well done Charlie and all of the Clontarf Barbarians on a fantastic achievement and in doing yourselves, your families and your club so proud.