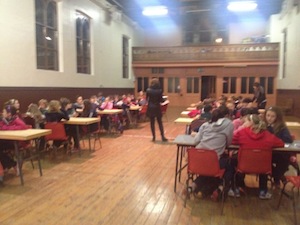 The following report has been provided by the organisers of the Community Games in Clontarf.

Over 50 children from 5th, 6th classes and 1st year took part in St. Anthony's Hall and a great time was had by all. Spot prizes were awarded during the evening, with lots of laughs during the 'Heads or Tails' game in particular where the lucky winner received a voucher that had been very kindly donated by Casa Pasta.

The quiz was a close call with the winners just 7 points ahead in the end, and 2nd and 3rd places separated by only half a point! Medals were awarded to all 3 teams. We'd like to say a big thank you to Casa Pasta and Moloughneys for giving us vouchers (Moloughneys will be used at our next event!), to Spar Vernon Ave. for the crisps and drinks and to St. Anthony's for giving us the hall and supporting our event which was organised by Niamh NiDhonaill.

Well done to the runners up from 'The A team' boys and '4 Star' girls groups, and best of luck to the winning team going forward to the Dublin finals on 23rd March. They are:

Don't forget that cross country training is happening every Tuesday night for the same age group, in St. Anne's park (pitch 21) at 5-6pm. So far we've had a great response with over 26 children joining in.

The Dublin finals will be held at the end of the month and there's no limit in how many we can enter (individuals and teams). You can get in touch with Deirdre Markey on (087) 205 7650 if you'd like to know more.

We'd love to hear from you if you'd like to help out. Give us a shout on clontarfgames@gmail.com or on Twitter @ClontarfGames.