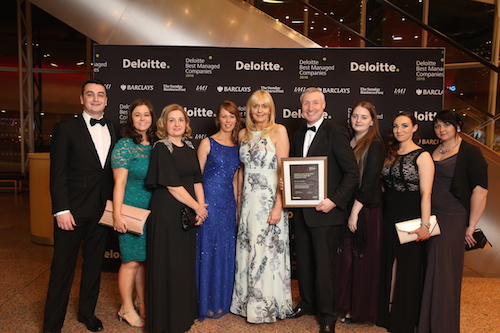 Congratulations to Clontarf Castle Hotel who have won at the Deloitte Awards 2016!

Representatives from some of the Ireland’s top businesses gathered at the National Convention Centre in the Dublin Docklands on Friday 4th March 2016 for the presentation of this year’s Deloitte Best Managed Companies awards. The awards programme recognises indigenous companies across the island of Ireland that are operating at the highest levels of business performance. This award considered Clontarf Castle Hotel’s performance from every perspective including strategy, capability, commitment, financial and growth potential across all key functions of the business.

General Manager, David Hennessy commented;’ The Deloitte Best Managed Companies Awards is highly regarded and respected in Ireland. To be recognised in this prestigious competition is a wonderful achievement. It provided external recognition of our successful business performance which is important to all of the hotel team and our loyal customer base; it also gives Clontarf Castle Hotel an enhanced profile in a competitive market place’

Well done to the entire team over at Clontarf Castle Hotel and here’s to many more awards in the future!