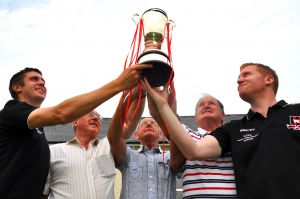 Former Republic of Ireland internationals Mick Lawlor and Pat Dunne led a parade of past players as Clontarf Athletic celebrated their 50th anniversary with a recent reunion at their old ground in Green Lanes School, Seafield Avenue. On an afternoon awash with nostalgia, the UCL champions welcomed back veterans Roy Watts, his cousin Robbie Watts and Tom Waller, of the club's first game in Division 2 of the UCL in September 1962.

Roy Watts, who co-founded the club with William Rubbathan and Ronnie Tucker, said "It's wonderful to be back in Green Lanes again, to see so many old faces. It's great to see the club continuing to prosper. Here's to the next fifty years".Watts, a former club secretary, recalled how the players' of 40 years ago complained about team selections, attendances at training and the absence of committee members at matches – even today, things haven't changed!

For the 2011/12 season, Clontarf Athletic reclaimed the Premier Division title, under the astute management of Darragh Sheridan, for the first time since 1996. As a plus, the club also won the Richard Knight Trophy final, following a pre-final dressing room visit to the AUL by Irish manager Giovanni Trapattoni. Both trophies were on display in Green Lanes on Saturday and were held aloft by Roy Watts and Mark Duignan, the current first team captain.

Loyalty has always been a by-word at the club, as illustrated by the ceaseless contribution of John Addie, the long-serving club secretary and assistant first team manager. A native of Hartlepool, Addie made his debut for Clontarf in 1969 and has never left, holding down a variety of roles after retiring as a player.

While Ian McMullen, well-known in sports field services, could reflect on a playing caeer with Clontarf which began aged 14 and ended, somewhat reluctantly, at 50. Also present was former player Peter Connolly, whose family pub, The Sheds, have been loyal sponsors of the club.

The return to Green Lanes, which included a spin on the pitch for a few aging veterans, was facilitated by Roddy Guiney, who served the club as player and administrator with distinction. Those who dared to roll back the years for the kick about knew all about it come Sunday morning.