Brian Boru and the Battle of Clontarf Heritage Trail Walk

Heritage Week 2013 had a grand finale in Clontarf this year with a thronged two-hour heritage walk along the Clontarf promenade. The route from Alfie Byrne Road to the Wooden Bridge is the proposed location for a Brian Boru and Battle of Clontarf Heritage Trail which will commemorate the thousand year anniversary of the Battle of Clontarf for 2014.

With the millennium commemoration of the Battle of Clontarf fast approaching, a heritage trail will create a focal point for the “Battle of Clontarf” that currently doesn’t exist in Clontarf. It will form a key part of the 2014 commemorations and continue to be an attraction for Clontarf in the future.  It will also form part of a National Brian Boru Heritage Trail between Killaloe, Cashel, Clontarf and Armagh.  The Battle of Clontarf is the most famous battle in the medieval period and is shrouded in mythology. 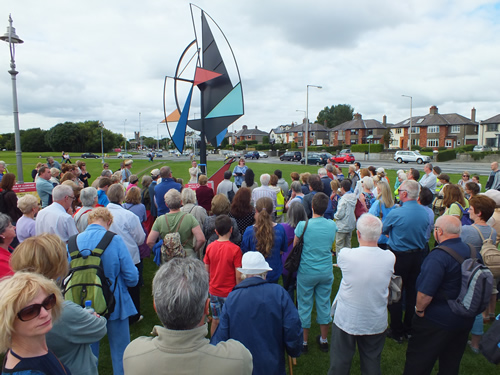 The heritage walk was a lovely introduction to the subject of the Vikings, Brian Boru and the Battle itself. There were a few surprises along the way with Ivan Erskin from Gael agus Gall, otherwise known as Ivan the Viking, there in full dress telling people about what’s it like to be a Viking. Niamh Caulfield, Grace Doolan and Liam Lonergan, members of Ceolt?irí Chluain Tarbh, entertained the walkers at the half way point by playing Brain Boru’s March.  A number of local experts including Douglas Appleyard, Kay Lonergan, Dennis McIntyre and Professor Colm Lennon also spoke along the way.  Darren McGettigan, author of the recent book “The Battle of Clontarf Good Friday 1014” gave a graphic description of the battle itself. The event was very well stewarded by members of both the Raheny Heritage Society and the Clontarf Historical Society.

The residents of Dublin can now look forward to seeing the Heritage Trail in place along the promenade by March 2014.