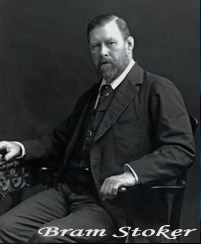 The following news item posted by the Clontarf Historical Society

It is quite remarkable just how little the general public knows about Stoker’s personal life while his creation, Dracula, is a world-wide phenomenon.

Stoker was born in Sligo and lived there for the first seven years of his life before the family moved to Dublin. Dennis McIntyre, who has been studying Stoker for many years, led the audience through Stoker’s life as a civil servant living in Clontarf, and how his interest in drama and theatre led him to becoming manager of the Lyceum theatre in London, and in the process making it the leading theatre in Europe.

While doing this he also became the business manager for Sir Henry Irvine, the great Victorian actor, and found the time to write seventeen books, including Dracula.

The most fascinating parts of Dennis’s talk were the links which he identified between the iconography of Dracula and Irish mythology, folklore and beliefs in 19th Century Ireland, and why the character can be viewed as an Irish creation.

A follow-up to the talk will be a guided walking tour on Saturday 12th May (conducted by Dennis McIntyre) of the places of interest in Clontarf that are associated with Stoker. Those interested should meet at 11.00 am at the entrance to Clontarf Castle (not the driveway entrance).