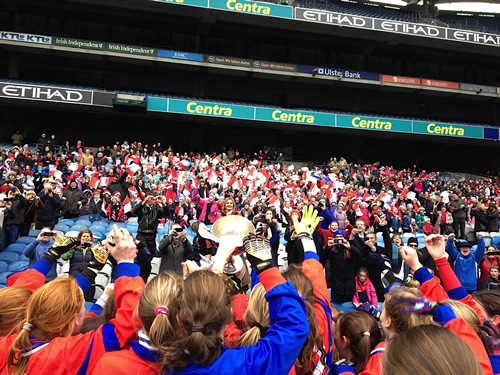 Belgrove Senior Girls school have enjoyed remarkable success in their short history of playing Gaelic Football. They have only been competing in the Cumann na mBunscoil primary schools competition for the past six/seven years. in that short time they have competed in no fewer than four division one finals. This is a massive achievement to be playing at the highest level year in year out and to top it off they have won three of the last five finals.

This years squad was made up of mainly sixth class girls with a small representation of fifth class girls, most of whom play their football with Clontarf GAA club next door to the school. There were huge numbers looking to play for the school team which made picking a final squad extremely difficult for the management, but goes to show the enthusiasm for sport in the school. After last years narrow defeat in the final in Croke Park, of which several of this years squad were involved, the girls were determined to go one better this year. After going through there group unbeaten, they overcame tough opposition in the quarter and semi finals to reach Croke Park again.

The final was a fantastic game of football. The game was nip and tuck from start to finish, with little separating the teams at half time. A strong start from the Belgrove girls in the second half gave them a slight advantage but the opposition got the game back to level pegging with a goal midway through the half. But the Belgrove girls were not to be denied and a flurry of late points sealed them a hard fought one point victory. All the girls performed fantastically well and girl of the match has to go to captain Aoife O'Mahoney whose heroics in goal helped secure the win. The support from the school and parents was fantastic and Croke Park was a sea of red and blue banners and flags. Special mention must go to the teams managers and trainers for all their hard work. 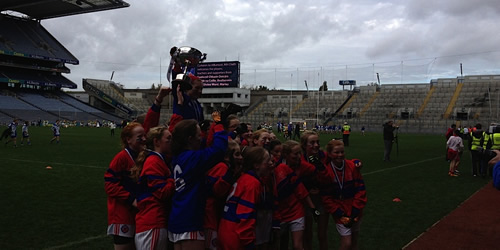 The standard of football in the school is extremely high and the future of gaelic football in Clontarf looks to be bright. Onwards to next year for a sixth final in a row, Belgrove Abu!

If anyone is interested in getting their children involved in Gaelic games, please feel free get in contact with Clontarf GAA's full time Games Promotion Officer, Stephen Behan. He will be happy to answer any queries you may have. stephen.behan.gpo.dublin@gaa.ie or 086 406 2452