3,000 turn up for 'Submission Sunday', supported by local celebrities 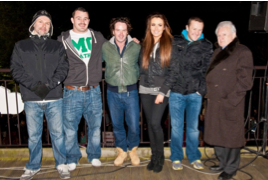 Over 3,000 people joined us for our final event which was staged in opposition to the Clontarf flood defence scheme, with many walking from the promenade to the rugby club.

About 1,400 submissions were signed at a specially erected tent in the rugby club car park.

We are very grateful for their support and for all the people who turned up on the day to make one final protest at these plans.

View all of the event photos here. (Photos by Brendan Lyon of Lyon Portraits.)