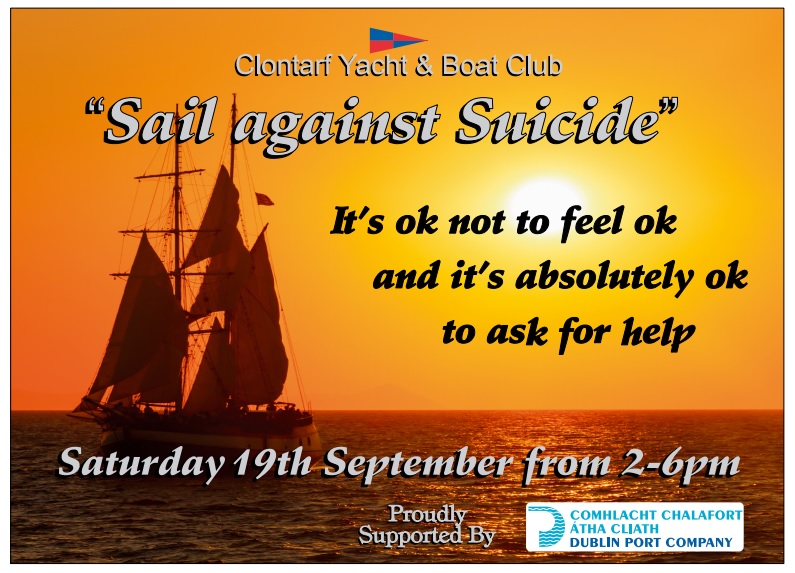 On Saturday September 19th, The Clontarf Yacht & Boat Club will host a Sail Against Suicide event. This event is an awareness day comprising of a race for all boats FG 2PM. The club will open for all members of the public to join in on the fun!

The event is an initiative of one of The CYBC's Junior members, to support the Cycle Against Suicide Charity, which was founded by the entrepreneur Jim Breen (of Secret Millionaire fame). Cycle Against Suicide hold events all over the country to raise awareness, and this is the first ever sailing event.

The event is open to the public, and there will be a full programme of entertainment at the Club from 2PM until 6PM on Saturday. There are a number of local companies who will be donating food and merchandise for the day.

However, CYBC would like to point out that regardless of the entertainment, free food and great prizes, the aim of the day is to highlight the awareness that IT'S OK NOT TO BE OK, AND IT'S ABSOLUTELY OK TO ASK FOR HELP. Shoulder to shoulder we can break the cycle of suicide.

This is not a fundraiser, but an awareness day that deals with an issue that has touched so many people! The CYBC has received such good will and support from all quarters and hopes to spread this message on the day.