Not A Game For Boys at The Viking Theatre 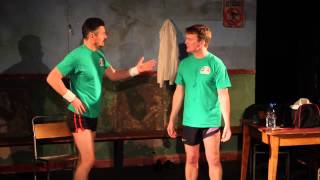 'Three desperate men, relegation night in the Ping Pong Premier League – it’s all to play for.'

Not A Game For Boys is a story about ping pong. Quite an unlikely premise, but it works brilliantly. Eric, Oscar and Tony are three taxi drivers who have found themselves at a crossroads in life. The three share a love for ping pong, and over the course of the play they come to various realisations about the paths they have chosen. Jagged black humour and terrific acting make this piece a real treat.

Simon Block's 'Not A Game For Boys' debuted in 1995, and since then, the play has been performed all over the world. This summer, the Viking Theatre will play host to this incredible work for two weeks. Tickets cost just €12. Call 087-1129970 for bookings.

“A funny, thought-provoking and foul-mouthed exploration of loyalty, masculinity and the dwindling of ambition…” - Manchester Evening News

“I squirmed with fun, and rocked with laughter as their eyes pinged and ponged, right and left and left me drained with laughter and applause…this play and production was savagely believable, with its riot of one-liners and had more C-words that C-words in Country…this was a blast of a night out…” – Liam Murphy, Munster Express.

“… a very funny and entertaining night at the theatre.” - The British Theatre Guide